Appealing TV: Storage Wars, Untold Stories of the ER, and Dogs of War

Aaliyah: The Princess of R&B Atlantis Dogs of War Down East Dickering Godfather of Pittsburgh Growing Up Gotti Storage Wars Supernatural The Eric Andre Show The Hollywood Film Awards The Missing Untold Stories of the ER You Oughta Know Live in Concert by Paolo Sambrano | November 10, 2014 9:04 am | in Culture | 0 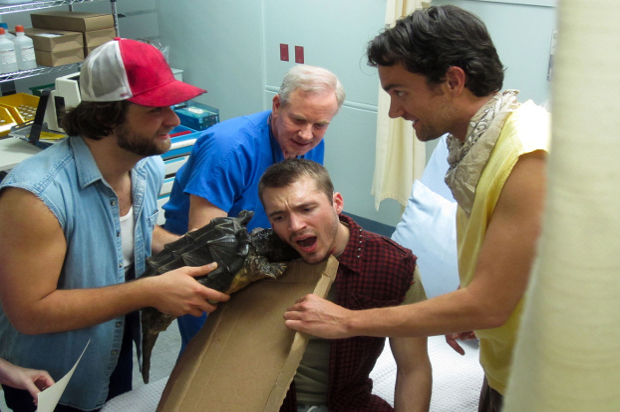 Monday, November 10
Growing Up Gotti: 10 Years Later (9pm, A&E)
Has it really been ten years since Growing Up Gotti began? It honestly just feels like a smear in my pop culture consciousness, maybe they weren’t able to cash in on their #brand awareness? This temporal retrospective just feels like an opportunity to lead into A&E’s new show Godfather of Pittsburgh (10pm, A&E, series premiere) which like most reality shows about business people with shady pastsm gives viewers a slight taste of the underworld without actually incriminating anybody.

Tuesday, November 11
Storage Wars (9pm, A&E, series premiere)
My first exposure to Storage Wars was listening to Tom Hanks rave about them on The Nerdist Podcast. Specifically, he talked relationship dynamics between Brandi and Jarrod. And hell, if Storage Wars is good enough for Tom Hanks, it’s good enough for me. Storage Wars shines a light into the new American Dream of a scavenging chic (backed by reality show cameras, naturally) in the crumbling economic infrastructure of the goddamn country.

Wednesday, November 12
Down East Dickering (10pm, History, season premiere)
Move Pawn Stars out of Las Vegas and have it take place in Maine, and instead of pawning items, troll classified ads for goods. Apparently the name for a person who does is “dickerer,” because snickering teenagers weren’t invented when the term came about.

Thursday, November 13
You Oughta Know Live in Concert (9pm, VH1)
You have no idea how disappointed I am that this wasn’t a live concert of the Alanis Morissette track off of Jagged Little Pill (which was released in June 1995, so its 20th anniversary is coming up this coming June). Hosted by Nicole Richie, You Oughta Know is VH1’s concert series for breaking new talent, with this year’s concert featuring A Great Big World, Aloe Blacc, American Authors, Bleachers, CHVRCHES, Echosmith, KONGOS, Mary Lambert, Tove Lo, Vance Joy and Sam Smith. It will also probably feature a crop of aging Gen Xers bemoaning the state of music or whatever.

The Eric Andre Show (12:15am, Adult Swim)
The third season of the most delightfully deranged not-talk-show-talk-show made its triumphant return last week, and boy am I remiss as fuck to have it slip past me the first time. It’s worth noting that every other bit shot on location this season had the cops called on them. In last week’s season premiere, Eric Andre broadcasted Seth Rogen’s actual cell number out. The Eric Andre Show is watching a trainwreck occur in within the gravitational pull of a singularity.

Friday, November 14
The Hollywood Film Awards (5pm, CBS)
Launched in 1997, The Hollywood Film Awards sounds suspiciously like a made-up award, much like the First Annual Montgomery Burns Award for Outstanding Achievement in the Field of Excellence. If there is a reason that you haven’t heard of it before, it’s because it’s never been broadcast on TV. Until now. CBS, picked up the rights to broadcast this year’s award ceremony, and they got Queen Latifah to host. This reminds me to gird my loins for writing about awards season.

Saturday, November 15
Aaliyah: The Princess of R&B (8pm, Lifetime)
My advice to celebrities is “don’t die.” Or at least don’t die tragically young enough* that Lifetime would see it fit to produce your biopic**. At least get that shit into real movie theaters. This week Lifetime pays their respects to Aaliyah, proving that (death) age is just a number. How much longer before Lifetime reboots the story of Selena?

*the production of the Unauthorized Saved by the Bell story is the outlier, and maybe demonstrate that even the alive are not immune.

**I have the sinking sensation Ryan Murphy’s hypothetical second season of American Crime Story will be about the death of Glee star Cory Monteith.

Atlantis (9pm, BBC America, season premiere)
Atlantis is a sword-and-sandals show about the legendary city before it sank into the ocean.

The Missing (9pm, Starz, series premiere)
Limited series on Starz looks like it has all the hallmarks of a show trying to go chasing prestige. And you know what TLC said about chasing prestige (ok, it was waterfalls, and the song was about AIDS, but still. Don’t go chasing prestige). Based on a true story of a missing child in France in 2006 and the nearly decade-long investigation in trying to locate him, at best it will be rote (limited series, multiple timelines, sadness) or it will just be bad trying to mimic what they think a prestige show should be.

Sunday, November 16
Dogs of War (10pm, A&E, time slot premiere)
Dogs of War actually premieres on Tuesday night after Storage Wars, but its official time slot is 10pm on Sundays, and since there isn’t much to write about on Sunday night this week, screw it. The reality show features returning war veterans and their service dogs that help them readjust to life after the war. The premise makes this show absolutely snark-proof.