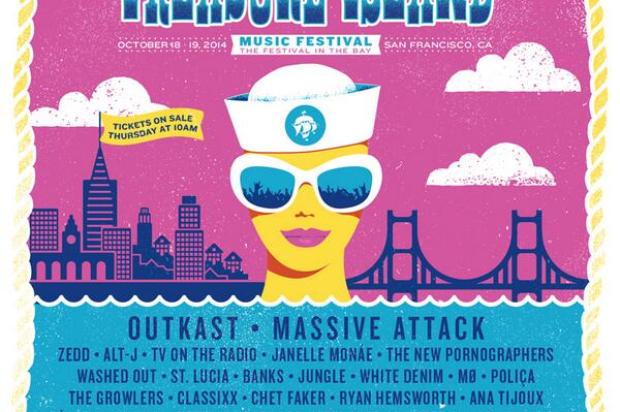 It can be difficult to choose a list of must-sees at a festival that certainly caters to the FOMO-infected audiophile. With no real chance of musical conflict, is it worth skipping a smidgen of Zedd’s set in favor of prime position for St Lucia? Yes, yes it is. Some artists just require a bit more from their audience and, in turn, give that much more in a live setting.

For all those moments that you’ve sat on the Century Ferris Wheel overlooking the entirely of the Bay Area eagerly awaiting the next set change, we present the moments that you should be paying attention to and the artists you should clamor towards. We’ll see you at the festival and will be bringing you daily coverage with photos, recaps, and more.

Painted Palms: An SFAppeal favorite from way back when the band relocated to San Francisco to record Nothing Lasts Long, Painted Palms have continued to turn heads in the local scene and on a national level. Their debut LP, Forever, cemented their ethereal indie sound and upped the production ante. Early track “Carousel” gains new life with a fully fleshed out arrangement, which they’ll most certainly be bringing to Treasure Island.

Janelle Monae: Janelle Monae is having one hell of a year when it comes to festivals. She was handpicked to open for Prince during July’s Essence Fest and has been all over the country touring off of the critically acclaimed Electric Lady LP. Her elaborate stage show barely shrinks from the expansive stages of a festival. Expect a wheeled-out Monae (trust us on this. When she comes out in a straight jacket, it’s a good thing) to bring the party.

Outkast: The dynamic legends make their second trip to the Bay Area this year and by all accounts, seem to favor a more intimate festival setting. If their BottleRock performance came as major surprise, be prepared for a bit of a let down. Outkast has consistently had the same setlist throughout their glorious run and don’t appear to be set on making any changes anytime soon, especially this late in the game. Still, an Outkast show is an Outkast show and there’s nothing wrong with enjoying the classic warm-up of “B.O.B” leading into “Gasoline Dreams” for the umpteenth time.

Chet Faker: Chet Faker has been absolutely revelation this year. Where other artists would take a nostalgia-ridden track (namely, “No Diggity”) and slow it down a la Gary Jules and the like just for laughs, Faker has released an entirely reimagined song that pairs perfectly with his other material. Debut LP Built on Glass is a sampler of Faker’s influences, all far-ranging and harnessed effortlessly by the electro-chameleon. Get ready for some soul in unexpected places and be ready to sing once he breaks out the Blackstreet cover.

The Growlers: Beach goth rockers the Growlers are creeping up the coast for Treasure Island. After five years of experimenting and tireless work, the five-piece has found cohesion in 2014’s Chinese Fountain, a marker of expertise within the studio and an expertly honed live show whose gothic moniker shouldn’t discourage you from at times dancing and simply relaxing on Treasure Island.

Massive Attack: For all the artists that Treasure Island booked, they’ve never been as right as with their headliners this year. The legendary team of 3D and Daddy G are headed to TIMF on a rare US stop, where they’ll close out the two-day festival. Given their rumored recent work with Tricky, who last year had to cancel his TIMF appearance due to visa issues, we can only hope for some major surprises or at least a taste of Tricky-tinged tunes along with classics off the pivotal Mezzanine.