Appealing TV: The World Series, The Millers, and Constantine 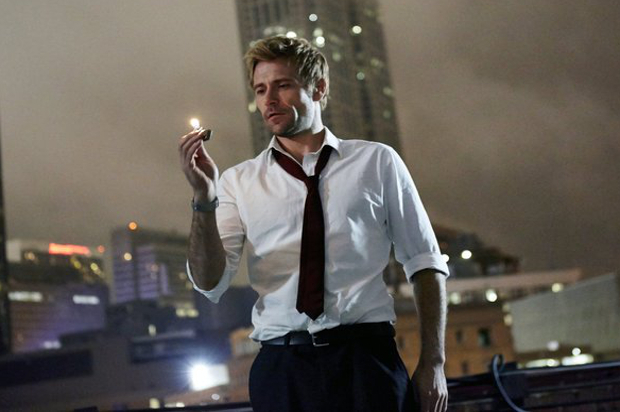 Congratulations to the San Francisco Giants for making it to the World Series (more on that in a bit). But if you’re the type that doesn’t super care about sports, having your social media feeds hijacked with sports analysis, or large social gatherings, this week is even more of a reason to stay inside and get comfortable with this week’s TV offerings.

Monday, October 20
The Millers (8:30pm, CBS, season premiere)
THE MILLERS! YOU’RE THE REASON MARGO MARTINDALE CAN’T BE A SERIES REGULAR ON THE AMERICANS YOU MONSTER AND I LIKE EVERYBODY INVOLVED IN THIS SHOW. Like Will Arnett! And Jayma Mays! And JB Smoove! And Beau Bridges! And now Sean Hayes is joining the cast this season. Not to mention that Greg Garcia created the delightful My Name is Earl and Raising Hope. I’m all for actors I like having steady jobs and paychecks, but seeing the talent here makes me think of my experience watching the first Amazing Spiderman – a bunch of great people in a situation you wish they could get out of. The TV greedy part of me wants to see this moved to a single-cam sitcom on a cable network or something.

American Dad (9pm, TBS, season premiere)
Seth McFarlene’s American Dad has been quietly shuffled off to TBS from FOX’s (now former) Sunday night Animation Domination block, now broken up with live-action fare Brooklyn Nine-Nine and freshman sitcom Mulaney, as I have mentioned in the past. Who knows, maybe it will flourish on the cable network, and mount a comeback, a la Family Guy? But always remember TBS picked up American Dad and Cougar Town, but not Happy Endings, and one those three shows one of these is not like the other.

Tuesday, October 21
World Series (5pm, FOX)
Well, the San Francisco Giants made it to the World Series again, facing the Kansas City Royals after besting the St. Louis Cardinals in a five game series last week. But more importantly, Sports ™ is the reason why Bob’s Burgers won’t be back on the air until November 2. It should also be worth noting that the Royals did dash the A’s wildcard hopes early. I write this from my ancestral home in Oakland, a couple of miles away from the Coliseum. That, compounded with my only marginal interest in sports that doesn’t involve face punching or hot dog eating, “Go Giants” will be a phrase I will say to people on the street in San Francisco, but kinda sorta not super mean it. But gosh, to quote Randall in Clerks, “I hate people but I love gatherings.” Just don’t be the asshole who mentions how much he doesn’t care for sports on your social media feeds. Or don’t be the asshole who lights Muni buses on fire either. Fuck both of those people. In lieu of a trailer, here is a clip of people doing doughnuts in the Mission when the Giants made it to the World Series.

Wednesday, October 22
The 100 (9pm, The CW, season premiere)
The glut of YA-centric dystopian fiction feels like the inverse of when Whitney Houston singing about believing children our our future. YA dystopian fiction is the older generation admitting that those coming up are in fact, boned in the future. But there is no reason you guys can’t be be pretty during the fall of Western civilization! The Lord of the Flies, in space, with hot teenagers CW show comes back for a season proper after dropping in midseason earlier this year.

Thursday, October 23
Inside the Actors Studio (8pm, Bravo)
So what is exactly the deal with Inside the Actors Studio lately, is it just coming back as a series of specials? Anyway, Sting is on this edition of the interview show with James Lipton, where I hope tantric sex enters the conversation. Also, fun fact: the look of John Constantine (of the Hellblazer comic series and upcoming NBC adapation) is based on Sting.

Friday, October 24
Alpha House (Amazon Prime, season premiere)
The political satire from Garry Trudeau starring John Goodman comes back for a second season on Amazon. Maybe a little something to fill the Veep sized hole in your heart.

Saturday, October 25
High School Possession (8pm, Lifetime)
I will always thank Lifetime for giving me a movie of the week to write about when there is absolutely nothing to write about on Saturdays. Teen possession, dogged high school journalists, it’s like Mean Girls meets The Craft (which is overdue for a reboot, real talk), with Say Anything’s Ione Skye and Kelly Hu along for the ride.