Accreditation Commission President Admits They Were Quick to Disaccredit CCSF 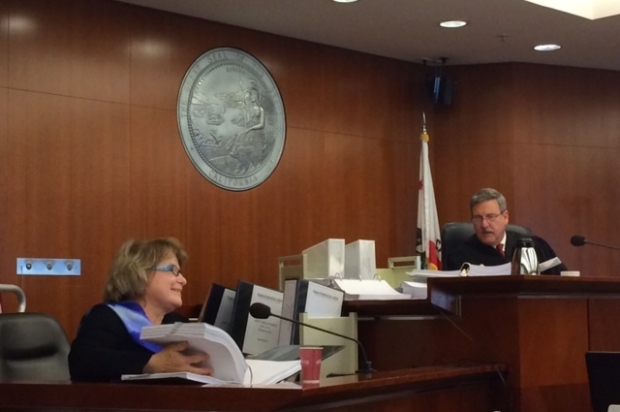 The president of the Accrediting Commission for Community and Junior Colleges testified in San Francisco Superior Court this afternoon that she did not provide the City College of San Francisco enough time to respond to perceived deficiencies during their accreditation process which threatens to close their doors.

This afternoon, on the second day of the trial of a lawsuit filed by San Francisco City Attorney Dennis Herrera against the western regional branch of the ACCJC, the commission’s president Barbara Beno took the stand as a witness.

Herrera filed the lawsuit last year on behalf of the people of California alleging unfair practices including a perceived or actual conflict of interest in the appointment of Commission President Barbara Beno’s husband, Laney College Career and Technical Education Dean Peter Crabtree, to a 2012 committee evaluating CCSF.

Beno said under oath and before San Francisco Superior Court Judge Curtis Karnow today that she and her husband didn’t speak about the accreditation of CCSF.

She said that when she found out that he was going to be on the team reviewing the college, she told him “Have fun.”

Beno said the Department of Education later sent a letter to the commission because they felt having her husband on the review team would appear to the public as a conflict of interest.

On Monday during the first day of the trial, CCSF English professor and faculty union leader Alisa Messer, was called to the stand and said she was shocked to learn after the evaluation that Beno’s husband was on the committee.

“It strained credulity to believe there was no conversation at the dinner table or anywhere else and that the decision was independent,” Messer said.

Herrera claims the commission violated the state’s Unfair Competition Law by using unfair, biased and illegal procedures when it decided in 2013 to terminate the college’s accreditation.

He is seeking a court order overturning that decision and requiring the Novato-based commission to start a new evaluation process.

The lawsuit also alleges that committee and a follow-up committee in 2013 had too few academic members, as opposed to administrators; that the commission failed to provide the college with due process to respond to its charges; and that it was biased against the college’s mission of “open access” to the community.

Beno was asked about her role in the commission’s decisions concerning CCSF and the timeline for the college to comply with the commission.

Herrera’s team asked Beno, “Subsequent to the time that the commission convened and voted to terminate City College, did it afford City College additional time to respond in writing to the perceived deficiencies before finalizing the termination?”

The termination of CCSF’s accreditation was originally due to take effect on July 31, but in January, Karnow issued a preliminary injunction suspending the termination until the completion of trial proceedings.

Karnow is hearing the case without a jury and is expected to issue a written decision sometime after the close of the five-day trial.

The commission in court filings has denied that it was prejudiced or unfair and contended the decision to withdraw the accreditation was “absolutely correct” and was based on “enormous problems facing CCSF.”

Another witness who took the stand today was David Bergeron, the vice president of secondary education at the Washington D.C.-based educational think tank Center for American Progress.

Bergeron previously served as the acting assistant secretary for postsecondary education at the Department of Education, where he worked in various roles for more than three decades.

He said the accreditation process has flaws, but is designed to assure the public that they are getting a quality education.

But he said he believes the accreditation system “leaves broad latitude for accreditors” because of the complexity and the diversity of U.S. institutions.

Bergeron said that this year $135 billion was dispersed in financial aid for students in the U.S. and that the accreditation process is the main evaluation standing between schools receiving or not receiving those funds.