Police: Carjacking Suspect Shot At Good Samaritans Who Tried To Rescue Him 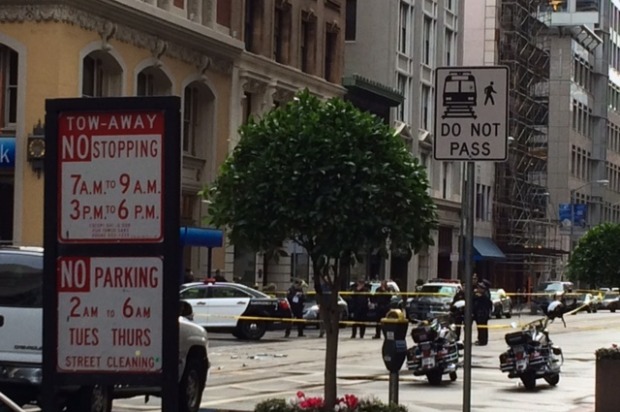 San Francisco police fatally shot a carjacking suspect after he opened fire at Good Samaritans who tried to assist him when he crashed a stolen SUV in the city’s Financial District this morning.

At about 4:55 a.m., a female victim in Richmond reported having her white Cadillac Escalade stolen by a male suspect, according to San Francisco police Sgt. Monica MacDonald.

The male suspect got into the SUV and drove onto Interstate Highway 580 across the Richmond-San Rafael Bridge and then proceeded onto southbound U.S. Highway 101.

California Highway Patrol officers pursued the vehicle as it crossed the Golden Gate Bridge. Once in San Francisco, police took over the pursuit with assistance from the CHP, but lost sight of the SUV near Bush and Fremont streets in the city’s Financial District.

At about 5:55 a.m., 911 calls came in reporting that the white Escalade had rolled over near the intersection of California and Battery streets.
MacDonald said several Good Samaritans tried to assist the male driver but he then began firing at them as he apparently tried to get out of the car.

The sergeant said one of the citizens who had tried to help the driver was struck in the chest by a fragment from either debris or a bullet. The Good Samaritan’s injuries are not considered life-threatening.

Police and emergency crews arrived at the scene and requested a less lethal, bean bag-type of ammunition and ordered the suspect to put down his gun.

Before the officers could get the bean bag weapon, the suspect turned his weapon on the officers.

Several officers fired at the suspect, who was pronounced dead at the scene, MacDonald said.

Julia Greig, a barista who was working at the Espressamente Illy coffee shop near the incident, said she and her coworker saw smoke coming from the street at about 6:15 a.m.

The pair went outside and saw the smoke coming from the SUV and approached the intersection to see if the driver inside needed help.
Greig said they heard shots fired from the SUV and ran back to the store for cover.

She said she heard cops yelling of the suspect to put his hands in the air. She estimated she saw at least 10 police cars and heard about 20 shots in all.

MacDonald said the San Francisco District Attorney’s Office, the city’s Office of Citizens Complaints, the SFPD homicide unit and its internal affairs unit are on the scene.

She said witnesses are being interviewed and video surveillance is being reviewed.