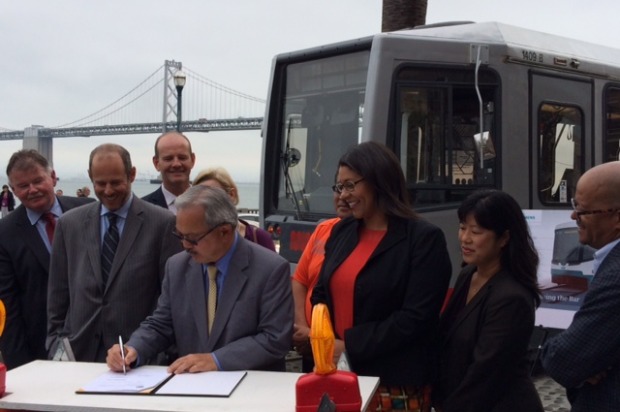 San Francisco Mayor Ed Lee signed a contract today that will begin the manufacturing of a new fleet of Muni light rail vehicles, with the first trains expected to be in use by the end of 2016.

The $648 million contract with Siemens Corps. will add 175 new and improved Muni light rail vehicles to the fleet, with the possibility of adding an additional 85 cars, bringing the total contract to $1.2 billion, Lee said.

The mayor, San Francisco Supervisor London Breed and San Francisco Municipal Transportation Agency’s Director of Transportation Ed Reiskin were among public officials gathered on the Embarcadero today who praised the contract, saying Siemens was awarded the project due to the company’s long history of innovative light rail manufacturing.

The company was also able to provide the city with a lower price tag than competitors and will manufacture the fleet in the company’s Sacramento facilities, providing Californians with jobs.

Reiskin said the current light rail vehicles are heavy, have frequently malfunctioning doors and steps, and are expensive to repair.

The manufacturing contract will be Siemens’ largest U.S. contract for light rail vehicles in the company’s history, according to the mayor.

About 80 percent of the contract with Siemens is federally-funded with the remaining 20 percent funded by the half-cent local transportation sales tax and other bonds, Reiskin said.

Muni’s director of transit, John Haley, said the new trains will have a better propulsion system and new all-electric brakes that will allow for a much faster and smoother ride.

Haley said the new light rail vehicles will be about 4,000 pounds lighter than the current ones, allowing them to move faster and use less energy.

Reiskin said said the riding public will be asked for their comments further down the line.

Reiskin said that while bicycles are not currently allowed on light rail vehicles, the city is hoping to pick a light rail vehicle design that accommodates bicyclists. However, he said that the SFMTA is still evaluating the feasibility of that change.

As Lee signed the new contract and expressed his excitement about the new vehicles today, he also encouraged voters to approve Prop A, a $500 million transportation bond on the November ballot that will pay for infrastructure improvements intended to improve the reliability, frequency and safety of public transportation.

Prop A, Lee said, will replace previous bonds as they expire and therefore will not raise tax rates. The bond is expected to improve traffic flow for not only buses, but also cars and bicycles.