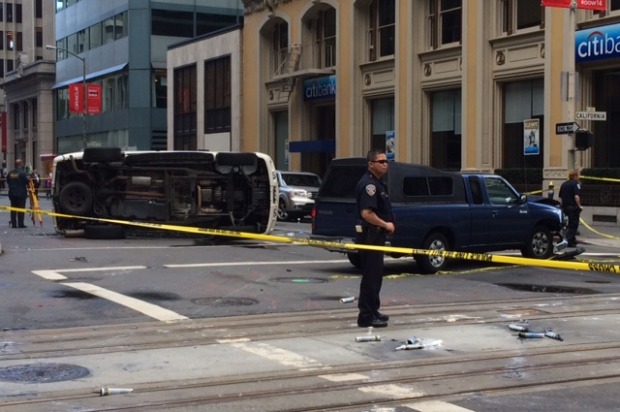 Six San Francisco police officers fired 32 times at a carjacking suspect who crashed in the city’s Financial District and turned a gun on the officers after a high-speed chase through three counties early Thursday morning, police Chief Greg Suhr said this afternoon.

At a community meeting to release information about the shooting, Suhr said he could not yet identify the suspect pending notification of his family but said that he was a 34-year-old East Bay resident with prior convictions for assault with a deadly weapon, brandishing a firearm and narcotics possession.

The suspect first came to the attention of Richmond police when a woman reported that a man had tried to kidnap her as she was driving to work in her white Cadillac Escalade at 4:55 a.m. Thursday, Suhr said.

She fled the car and the suspect drove away onto Interstate Highway 580 with California Highway Patrol officers in pursuit, Suhr said. They pursued him across the Richmond-San Rafael Bridge, onto southbound U.S. Highway 101 and then over the Golden Gate Bridge.

San Francisco police joined the pursuit as the suspect drove onto city streets until officers lost sight of the Escalade near Bush and Taylor streets.

Minutes later at 5:54 a.m., police received reports of a crash involving several vehicles nearby, including a white Escalade that had tipped onto its side, police said.

Witnesses reported hearing a “loud bang” and Suhr said that the suspect fired a single shot from a six-shot revolver from the Escalade. A man who had approached the suspect to help after the crash suffered a superficial wound to his chest, but Suhr said it was not clear if he had been struck by a bullet.

The man was close enough to the suspect to taste gunpowder, Suhr said, but the bullet traveled through the roof of the SUV and struck an 11th-story window of a nearby building.

Officers arrived quickly on foot and while waiting for a less-lethal beanbag shotgun weapon to help subdue the suspect, he turned his gun at the officers, prompting six of them to open fire.

Together they fired 32 rounds at the suspect. Suhr did not know how many times the suspect was hit by gunfire, but his wounds were fatal and he was pronounced dead at the scene.

A witness reported to police that there was possibly a child in the overturned Escalade, but Suhr said the witness saw only a child’s car seat and that there was no child involved in the shooting.

The officers who opened fire have been placed on paid administrative leave, which is standard protocol following an officer-involved shooting. The case is being investigated by the San Francisco District Attorney’s Office, the city’s Office of Citizens Complaints and the Police Department’s homicide and internal affairs units.

If there is no indication that the officers fired improperly, Suhr said they could return to duty sometime next week.

Today’s meeting was held at noon to invite community members to hear information about the shooting and to ask questions. It was scheduled for a time when many who work in the area would be on lunch break, Suhr said.

The crash and shooting happened before most downtown workers had arrived and the often-busy intersection of California and Battery streets was quiet at that time.

“An hour later … the entire area was full of people,” Suhr said, calling the timing of the crash “very fortunate.”