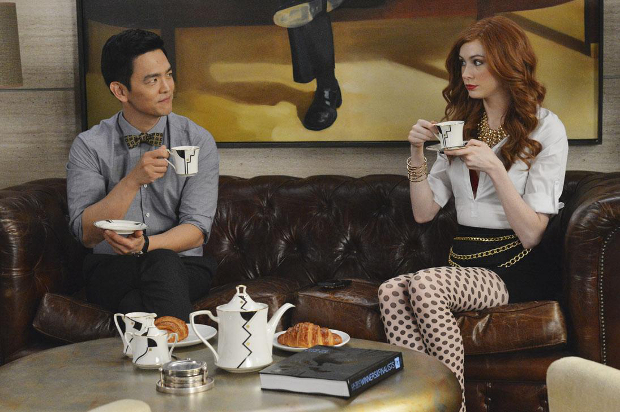 More new TV rolls in this week! Let me introduce you to it, right here.

Monday, September 29
Castle (10pm, ABC, season premiere)
Come to Castle for the familiar case of the week plots and Nathan Fillion, stay for the possible references to Firefly that will set the internet on fire.

NCIS: Los Angeles (10pm, CBS, season premiere)
The fact that the Los Angeles spin-off of NCIS focuses on undercover work makes me think that this is some long-range meta commentary on the fakeness of LA and the culture of everybody playing a role. The stuff about stopping naval/marine crime is merely a cover (ha-cha-cha).

Tuesday, September 30
Peaky Blinders (Netflix, season premiere)
Cillian Murphy and Sam Neill starring in a show is enough to get most people to watch, but it is a bonus that the show is also outstanding (that’s what the internet tells me at least). Netflix acquired the exclusive rights to air the BBC historical drama in the US, and it concerns itself with the titular Peaky Blinders (a gang whose name comes from sewing razor blades into the peaks of their hats) and their ambitious gang leader in 1919 Birmingham. Ambitious in that era is defined as sitting on a crate of guns and having communists and the IRA on your back (on top of Sam Neill’s inspector). Also, Tom Hardy has joined the cast in series two, which is set to premiere in the UK in early October.

Selfie (8pm, ABC, series premiere)
Created by Emily Kapnek, of the dearly departed Suburgatory, stars Doctor Who’s/Guardians of the Galaxy’s Karen Gillan and Harold and Kumar’s/Sleepy Hollow’s John Cho in a riff on My Fair Lady for a social media/viral/#blessed/branded age. What kind of Instagram filter would you use to diffuse all the misogyny of John Cho’s Henry Higgins character?

Manhattan Love Story (8:30pm, ABC, series premiere)
Oh, that’s the kind of love story where they serve it with tomato broth instead of a cream based soup, right? So this show’s gimmick is that we get to hear the inner thoughts of our characters, like a half-stepping Peep Show. Aside from Psych’s (and Hulk Hogan’s No Holds Barred) Kurt Fuller in the cast, there is probably no reason to watch. We will be talking TV in early November and just collectively be like “Manhattan Love Story who now?”

Happyland (11pm, MTV, series premiere)
Incest is wincest. Which is all you really need to know about this new teen dramedy taking place in an amusement park from MTV.

Wednesday, October 1
The Bridge (10pm, FX, season finale)
I salute The Bridge’s aspirations to break away from its season one (and original Scandinavian source materiaL) murder police procedural roots to want to be this sprawling saga about being on the grey side of the law on either side of the US-Mexico border. But due to its large cast of moving parts and gears, I felt like a lot of this season started to buckle under its own weight, with too much throat-clearing and plates spinning in the air. It was still great television, but maybe bit off a bit too much. No word on if the series will be returning next summer, but I sure as shit hope so, if nothing else for Matthew Lillard’s and Emily Rios’ dogged performances of journalists trying to Expose The Truth ™.

Stalker (10pm, CBS, series premiere)
Stalker might be the new first-to-go favorite in the 2014-2015 television series death pool. In this violence-against-women procedural, created by Scream scribe Kevin Williamson, starring Maggie Q and Dylan McDermott, all you really need to know is that a woman gets set on fire in the opening minutes. It feels like a Investigation Discovery true crime show about violence against women in serialized form.

Gracepoint (9pm, FOX, series premiere)
American audiences are finally going to have a version of 2013’s UK sadness parade Broadchurch to call their own with creator Chris Chibnall writing (re-writing? adapting?) the episodes and David Tennent putting on his best American accent. For us all. The original, which was about the murder of a child in the small town of Gracepoint and subsequent investigation upending all the relationships in the town as accusing fingers fly. Anna Gunn also co-stars! So hey Skyler haters, if you already all haven’t gotten yourself trapped in a well yet, come on over to Gracepoint and find ways to get angry about how Anna Gunn is conducting herself but you know what don’t instead find yourself a bunker to seal yourself off in so when you all get unearthed in one hundred years you’ll be studied for your antiquated and irrational hate of Skyler White.

A to Z (9:30pm, NBC, series premiere)
A to Z is the make-good show for Cristin Milioti, who America fell in love with during her debut as the titular Mother in How I Met Your Mother. What we are watching with A to Z is 500 Days of Summer: The Series, with the hook that each episode goes in alphabetical order charting the rise and fall of a single relationship (Oh, it’s the romantic-comedy version of The Killing).

Jean-Claude Van Damme: Behind Closed Doors (11pm, Reelz, series premiere)
This is an acquisition of a 2011 documentary series which aired in the UK which takes viewers behind the titular/metaphorical/literal closed doors of the Muscles From Brussels himself, Jean-Claude Van Damme.

On the Menu (8pm, TNT, series premiere)
Ty Pennington and Emeril Lagasse host this food competition series with the winner’s dish being featured in the menus of the big box strip mall Chili’s and Cheesecake Factories of the world. (Everything’s good at the Cheesecake Factory!) Hey, if TV networks wanted to do some kind of synergistic food-television relationship, partner with TGI Friday’s to produce a limited-run series featuring a group of people eating all you can eat apps. (apps are the new killer app). Have it be like Utopia wherein people can get voted out, and someone new can get tagged in, but the gist is the apps never stop. It will be “They Shoot Horses, Don’t They”, but for mozzarella sticks.

Survivor’s Remorse (9pm, Starz, series premiere)
LeBron James is a producer on this Starz comedy about an early 20’s basketball phenom who is thrust into the spotlight after being signed to a multi-million dollar basketball contract in Atlanta and why this isn’t called Ball-tourage I will never figure out.

Sunday, October 5
Bob’s Burgers (7:30pm, FOX, season premiere)
Getting to watch Every Simpsons Ever on FXX in August only reinforced in my dome piece how Bob’s Burgers is the one true successor to golden-age era Simpsons.

Bar Rescue (9pm, Spike, season premiere)
SHUT IT DOWN. SHUT IT THE FUCK DOWN.

Homeland (9pm, Showtime, season premiere)
After the departure of series lead Damian Lewis last season (which also means the Brody family making their exit – there will be no more incredible disappearing Christopher for you to marvel at anymore), Homeland finds itself in the position of re-piloting itself for its fourth season, which could be just what the show needs, frankly. Carrie Mathison finds herself ugly crying as a CIA station chief in Istanbul in the wake of a botched drone strike.

Mulaney (9:30pm, FOX, series premiere)
Mulaney is an unabashed throwback to the multi-cam sitcoms of the 90’s. NBC originally passed on this series, then FOX stepped in. And sometimes when you throw things back, you get Throwback Pepsi, and sometimes you get Mulaney. Starring comedian/former SNL writer John Mulaney, former SNL cast member Nasim Pedrad, and Martin Short.