Appealing TV: Play It Again Dick, Red Band Society, And Can She Have It All?

Dancing With The Stars Hack My Brain Married Mindy Project New Girl Play it Again Dick Red Band Society The Honorable Woman The Mysteries of Laura You're the Worst by Paolo Sambrano | September 16, 2014 8:48 am | in Culture | 0 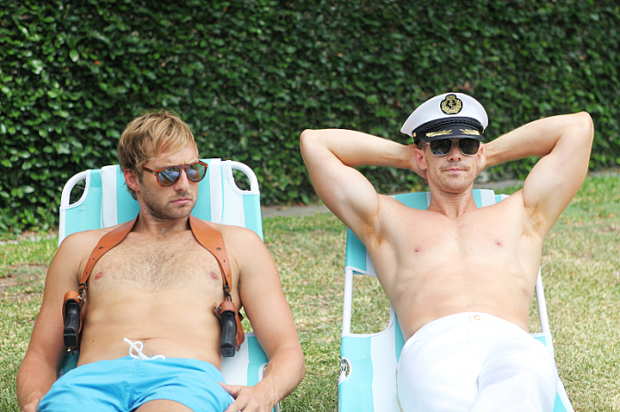 Fall season is at our doorsteps. I just hope you cleared out your DVRs.

Tuesday, September 16
Play It Again, Dick (CW Seed, series premiere)
After the Veronica Mars movie, novelization, us marshmallows are getting a Veronica Mars spin-off web series, premiering on CW Seed, The CW’s online incubator for new shows. This isn’t a spin-off in the traditional sense (probably more Party Down than Veronica Mars), as Ryan Hansen plays an exaggerated version of himself trying to campaign for a spin-off of Veronica Mars featuring his hard partying lothario Dick Casablancas taking up the mantle of private eye (or dick, if you were) but with, like, babes, and sweet one-liners, and some sick action.

New Girl (9pm, FOX, season premiere)
Season three brought us the pairing (and eventual dissolution) of the Nick and Jessica relationship and the return of Damon Wayans Jr. from the exploding sun of Happy Endings, reprising his role of Coach from the New Girl pilot back in 2011. In great news, he is returning as a series regular for season four. Jessica Biel guest stars in the season premiere.

Mindy Project (9:30pm, FOX, season premiere)
Mindy Project enters its third season, complete with its own will they or weren’t they finally becoming so with Mindy and Danny finally together (if the episode title, “We’re A Couple Now, Haters!” didn’t make it any clearer).

Wednesday, September 17
Red Band Society (9pm, FOX, series premiere)
FOX hops in on the terminal sick kid, Fault in our Stars game with Red Band Society, starring Octavia Spencer and the ward of terminally ill kids who form their own intensive care-esqe Breakfast Club unit, complete with teenage lusting and recreational drug use. Because of Fault in our Stars and now Red Band Society, terminally sick kids are the new vampires (because they’re a drain on our nation’s budget AMIRITE, UP TOP RON PAUL/CHEM TRAILS 2016).

The Mysteries of Laura (10pm, NBC, series premiere)
A show that sounds like a 90’s era Nickelodeon show (shoutouts to the The Mystery Files of Shelby Woo), when in actuality it is an American remake of the Spanish television series Los Misterios de Laura. Debra Messing is a cop chasing down perps who also has to deal with kids. It’s an Island of Doctor Moreau genetic experiment, splicing Parenthood and Law and Order, but in a cruel joke from the television gods, isn’t either show or very good. As far as picking the first show to go dark in this television season, this isn’t a bad choice.

By the way, is ‘STRONG FEMALE CHARACTER’ just an anagram of ‘BUT CAN SHE HAVE IT ALL’ (I’m awful at anagrams).

Thursday, September 18
The Honorable Woman (10pm, Sundance TV, series finale)
I stand by what I said when I first compared The Honorable Woman to an artisanal Homeland. Maybe a dash of Iron Man in there too, but Maggie Gyllenhaal has been straight up killing it in her first ever television (mini) series starring role as Nessa Stein, British-Israeli head of an arms company. Who would have thought that contract bidding for telecommunications infrastructure in the West Bank (among other things) could be so engaging? The Honorable Woman has been doing a very good job at filing The Americans shaped size hole in my heart.

Married (10pm, FX, season finale)
When the previews for Married and You’re the Worst You’re the Worst (10:30pm, FX, season finale) ran, I was expecting Married to be the hit (with Judy Greer and Nat Faxon starring), and You’re the Worst was the messy sitcom. While Married wasn’t bad, much like like any long-lasting marriage, it just was there, although having its moments. Having Jenny Slate and recurring guest stars John Hodgman and Paul Reiser helped. I wouldn’t mind seeing Married come back next season, although with this being television, it is dubious at best.

What impressed me about You’re the Worst is how it found its footing really fast and the caustic un-romantic comedy fell into a super comfortable groove with the chemistry between everybody apparent, to the point where I was looking more forward to this than to Married.

Friday, September 19
Hack my Brain (8pm, Science Channel)
Todd Sampson goes beyond doing Sudoku on BART to help avoid dementia 50 years down the road with three hours worth of optimizing our brain’s cognitive abilities, but seriously, can we retire hack as a verb? The only way anyone should ever use the word ‘hack’ is if they add ‘-ers’ to it and are talking about 1995’s Hackers. Meanwhile, I am still trying to learn how to shoot psionics blasts out of my dome piece via meditation.

Tanked (10pm, Animal Planet, season premiere)
Well, if you are a show about high end aquarium builders that airs on a Friday night, you can do a lot worse than having Shaq show up on the season premiere.

Saturday, September 20
On the Run Tour: Beyoncé and Jay Z (9pm, HBO)
If you weren’t able to make to either night of San Francisco leg of the On the Run tour with our queen Beyoncé (or hear it from your domicile), HBO has you covered with a concert film, so it’ll be like you were there, weeks after the fact.

Sunday, September 1
Madam Secretary (8:30pm, CBS, series premiere)
Tea Leoni stars as the newly sworn-in Secretary of State (under the presidency of Keith Carradine). Because all of media is still wondering if a woman can have a career on top of doing other patriarchy-addled societal bullshit. Its pairing with The Good Wife (9:30pm, CBS, season premiere) makes Sunday nights a slam dunk for the middle aged.