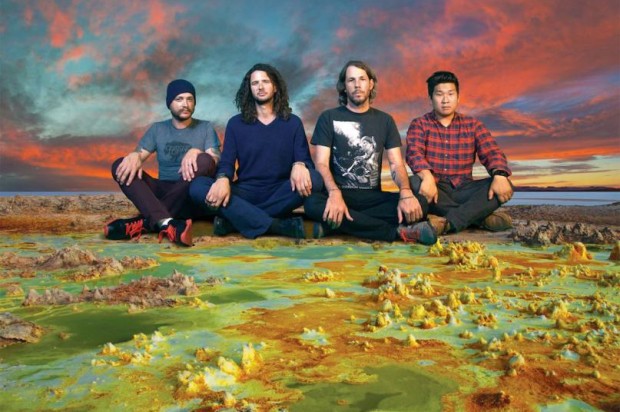 The storied music history of the Bay Area has brought bands together and brought about their demise but rarely has it signaled success as much as finality. Almost exactly three years ago, RX Bandits found themselves at a crossroads and playing their last live show in San Francisco. The ska-turned-prog band was known for their exhausting touring schedule as much as their innovative genre-bending sound, so it came as a surprise when, just four months earlier, the band had released a statement of bittersweet resignation.

“SF is big. It means a lot,” frontman Matt Embree tells the Appeal. “The last show we ever did was that Regency Ballroom. Well, what we thought was our last show ever. There were people who flew from Australia, Japan, and England; who flew fifteen hours to see us.”

Last year, RX Bandits returned to the Regency Ballroom to honor the decade anniversary of their breakout fourth album, aptly titled the Resignation. The idea to return to the road was a very intuitive one, as the band had released the Resignation on the cusp of finally reaching headliner status. In fact, SF once proved a blockade for Embree and co. Despite their recent successes and acclaim, for all their efforts, they just couldn’t get booked in the city.

Their first big Bay Area break came at one of SF’s most legendary venues. “Back in the day, we were just playing Fresno and Oakland and Berkeley and couldn’t get a show [there]. We finally got one at Bottom of the Hill. I loved that live album that Avail did there,” Embree reminisces. “Seeing those flyers and records was an awesome experience, kind of like Gilman in Berkeley where there’s such history to the venue.”

It only makes sense that the band return to yet another famous music space: the Fillmore. Expect plenty of old material to get you well-sated for what may be RX Bandits’ best effort yet. The recently released Gemini, Her Majesty is the type of cathartic album you’d expect from the four-piece that has been made all the more welcome through their return to the stage. Gemini, Her Majesty is an empowering record, its messages as far-reaching as bassist Joe Troy’s voluntary admission into rehab and the simple fact that “we were not ready for goodbye,” so says “Stargazer”, the first track the band penned for the album

“When we broke up that was such an interesting study in identity and self-worth: how you build your own self-identity out of what you’re good at,” Embree explains. “To be successful, it’s really tough and made me realize that no matter what my identity is tied to that band and how much I tied to it… I’m proud and still want to progress as a band.”

The masses agreed and Gemini, Her Majesty was effortlessly funded via their PledgeMusic campaign. Though Embree himself isn’t all that thrilled about the restructuring of SF’s socio-economic climate, he says the band has readily embraced this new system of “direct and democratic” representation and distribution.

That immediacy has made RX Bandits all the more close with their loyal fan base. A particular highlight of their current tour was their stop in Salt Lake City. Through poor pre-sales and in the face of a promoter allegedly ripping off the masses through ticket sales, RX Bandits were still able to have one of their best shows on tour. The band is eager to return to SF and deliver a similarly unifying performance no matter the complications.

“People are just as important as the band onstage. We want them to be involved. I’m not there to stand there and recite the songs; I want everyone to feel like they are a part of something greater than ourselves,” Embree says. “Some bands forget to play to humans. We’re all living beings with desires and potential. With our shows, there’s almost this conjoining energy and it’s so beautiful when it happens.”