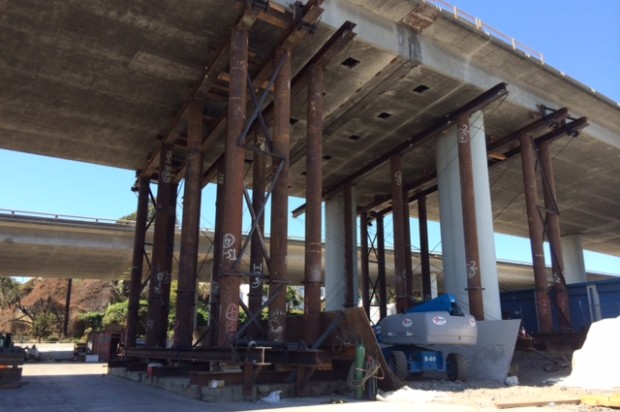 Northbound Interstate Highway 280 in San Francisco will be closed over the Labor Day weekend as replacement hinges are installed along the highway to strengthen the overpass in the event of more seismic activity, a Caltrans spokesman said today.

The stretch of northbound I-280, from the U.S. Highway 101/I-280 interchange to San Francisco’s South of Market neighborhood, will be fully closed over the weekend while two large sections of the roadway are removed and then replaced with reinforced sections, according to Caltrans spokesman Steven Williams.

The closure of northbound I-280 will begin at 2 p.m. on Thursday and continue until 5 a.m. on Tuesday, Sept. 2. All northbound I-280 traffic will be detoured onto Highway 101, Williams said.

The two pieces of roadway that will be removed are each about 24 feet wide, 48 feet long and 5 feet thick, according to the Caltrans spokesman.

Williams said the hinges on I-280 were designed in the 1960s and, based on an inspection conducted seven years ago, were determined to be in need of replacement.

According to Caltrans engineer Andrew Yan, the new hinges are designed to withstand earthquakes by allowing more room for the highway to sway horizontally should a temblor occur.

The new hinges create a space between the sections of the highway in which the road can sway horizontally, reducing the likelihood of the roadway collapsing if the sections shift during an earthquake.

Yan said specifically-engineered padding will also be placed inside the overpass to act as shock absorbers. The padding will protect the sections of concrete roadway, should they smash together in a high-magnitude earthquake.

Starting Thursday, Caltrans will replace the hinge on the first section, running above the Dogpatch neighborhood, and then move south towards Highway 101, where the second section will be removed and the hinge replaced, according to Caltrans.

Williams said the closure of northbound I-280 has been a long time coming and was not spurred by the 6.0-magnitude earthquake that damaged roads and buildings in Napa and Solano counties early Sunday morning.

Over the weekend, motorists can call 511 or check with 511.org for more information about the closure. Motorists are advised to use public transportation such as BART, Caltrain, MUNI, and SamTrans to avoid heavy traffic in the area caused by the detour.