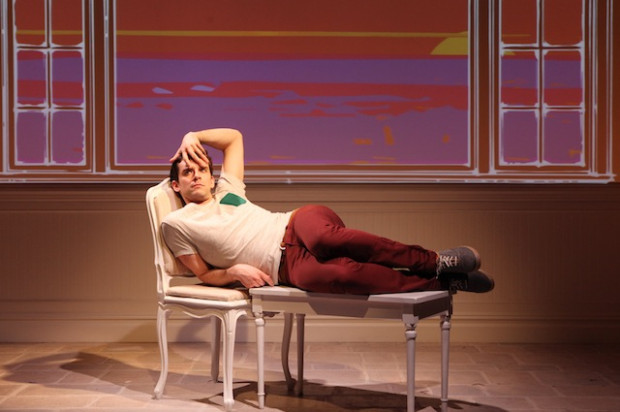 Barbra Streisand has a basement full of crap she’s collected over the years. Really, who doesn’t, in some form or another? But Barbra’s basement is a little different. You see, it’s been designed to look like a small town street full of quaint little shops. Her old costumes can be found in the antique clothing store. Dolls are in Bee’s Doll Shop. And of course, let’s not forget the Gift Shoppe, full of mementos and tiny bars of soap. Don’t believe me? Here:

This is something you’ll learn right off the bat at Buyer & Cellar, the one-man-tour-de-force that has made a move from off-Broadway to San Francisco. Yet that bit of insanity is in fact the only true thing in the play, and this is made perfectly clear from the beginning, when star Michael Urie sits on the stage, a copy of Barbra Streisand’s book My Passion For Design in his hands.

During the short introduction, he explains how playwright Jonathan Tolins was inspired by the book–and Barbra Streisand’s Oprah appearance promoting it–and imagined what it would be like to work in that quaint personal mini mall. Urie goes one to tell us everything else we are about to hear is fake–just to make sure the very famous and “litigious” Streisand understands, should she ever actually come and see the play.

He also makes it clear that he’s not an impressionist, and that enough people–“even some women!”–have “done” Streisand before, so his interpretation is less impression, and more impressionistic. After this introduction–which includes readings of choice passages from the Streisand book–the play begins, with Urie now Alex Moore, a struggling actor in Los Angeles who, after being fired as mayor of Disneyland’s Toontown over an unfortunate churro incident, goes on a job interview in Malibu, at a huge ranch house, guarded by “brand new barn doors that look old.”

After meeting the assistant in charge, he learns that the job involves working in a basement full of “shops.” He will be the sole shop worker, and he’ll only have one customer, the “lady of the house,” who enjoys the immersive experience of “shopping” her own things. Of course, he thinks it all sounds horrible and a bit insane. Until he learns who the lady of the house actually is.

He admits he’s not a stereotypical gay Barbra Streisand fan, but that he is well aware of her, and considers her part of his “gay heritage.” So when offered the job, be dives right in, manning the shops while wearing a uniform, days spent dusting French dolls and listening to the incessant “whir-ir-ir” of the frozen yogurt machine. Until one day, Barbra actually shows up.

Urie’s Streisand isn’t dead on, as he warns, but it’s still kind of perfect, and he transitions from Alex to Barbra seamlessly. The play’s best laughs come the unexpected things Barbra does and says in that cellar full of shops, so I won’t spoil it. But know that it’s completely ridiculous, and yet, somehow, completely believable.

Urie is just stupendous. He’s probably best known for his role as one of Betty’s nemeses on “Ugly Betty,” and he was certainly funny, if a tad stereotypical in that, but his comedic talent are on full display here, and he doesn’t disappoint. Playing Alex, Alex’s failed screenwriter boyfriend Barry, Barbra’s assistant, and Barbra herself, he makes every character completely recognizable through body language and cadence, while never going completely over board. His comedic timing is so dead on, I can’t imagine anyone else ever being able to play the part as well. (Apparently, it was originally written with Jesse Tyler Ferguson in mind, but should he ever take over, he’ll have some huge and hilarious shoes to fill.)

It’s not all laughs. There are some genuinely moving moments between Alex and Barbra, and the inevitable end is both poignant and brilliantly comedic. Going into Buyer & Cellar I had my doubts. It seemed too on-the-nose in its subject matter: A gay man making fun of Barbra Streisand? Come on now. But turns out it’s a truly funny and insightful look into fame, fans, and the desire create to one’s own personal utopia.