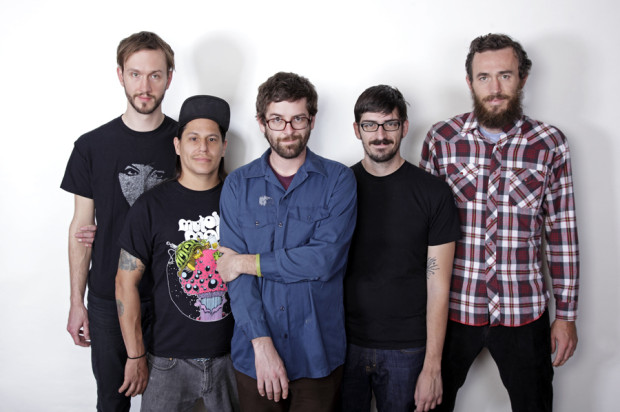 There’s a musical trope of sorts, that the vulnerable lyricist will inevitably open himself to an eager audience armed with empathy and the type of soul-affirming connection which acts as a band’s musical currency. The trope is that the artist is perfectly comfortable highlighting their greyscale rainbow of emotions in song but border on coy at the best when approached on the record. Andrew Jackson Jihad frontman Sean Bonnette is most certainly not one of those stereotypical shrinking violets.

Andrew Jackson Jihad first formed in 2004 and, after ten years in music, celebrated their decade achievement with the release of Christmas Island. Plotting the distance between the album’s namesake territory and Bonnette’s home state of Arizona is an almost comical endeavor. Nearly 10,000 miles exist between the two, spanning a dizzying amount of time zones and the entirety of the Pacific Ocean. And yet, Christmas Island is an inherently personal album born of writer’s block and homesickness.

“I feel like there are shades of Christmas Island that highlight being isolated and how I feel not living in Arizona. I’m actually living in Lancaster, Michigan right now,” Bonnette tells the Appeal. “Some of those themes are coming to terms with how you identify with where you’re from.”

Perhaps the largest difficulty lay in AJJ’s style rather than substance. Bonnette and co. originally envisioned the album to be a hyper-electric record. Its stripped down sound, jam-packed with jangling choruses and bassist Ben Gallaty at his most intuitive, were the type of constraints needed to keep the band at its most creative. A similar template was used when crafting Christmas Island’s whimsical cover.

The band first met artist Suzanne Falk at former Phoenix coffee shop Willow House, where they worked as baristas. The friendship progressed and Bonnette found himself at Falk’s house one night “making this diorama and really creating an evocative scene from found objects.”

“It was so great to watch her work and see her process. That diorama ended up becoming the cover art; she painted it,” Bonnette says. “There are a lot of nods to Arizona, like the scorpion and orb that she put in there which I swear is given to every kid in Arizona when they’re six years old. She put in the scorpion without realizing that I’m a scorpio too… There’s something about the way of life there that just works for me. I find myself writing my best there.”

The band’s geographical love extends far out from the Southwest and into the Pacific Northwest. Their San Francisco show tonight at Slim’s is enough to evoke fond memories of AJJ’s beginnings. “Our first tour, we ended up seeing the Mountain Goats at Bottom of the Hill and played there ourselves the next year. We kind of bum-rushed [frontman] John Darnielle and gave him some demos,” Bonnette says with a laugh. “I’ve been a long time fan of the Pacific Northwest. In our ten years playing there, we’ve never had a bad show.”