Large Crowds for US Soccer Screening at Civic Center Plaza 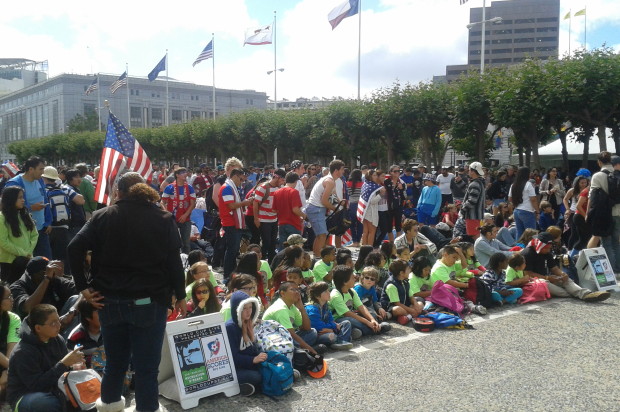 Crowds of fans clad in red, white and blue gear packed San Francisco’s Civic Center Plaza this afternoon to watch the U.S. face Belgium in the round of 16 of the World Cup.

The city’s Recreation and Park Department hosted the free public screening in partnership with American SCORES Bay Area and sponsorship from Twitter and Visa.

Mike Pendergast, 45, sat comfortably in his lawn chair watching the match on the massive screen from midway down the plaza. He traveled from Oakland on his day off to watch the World Cup with “like-minded folks.”

Die-hard fans cheered alongside office workers catching a few minutes of the 1 p.m. match during their lunch break. Food trucks conveniently lined the back of the plaza to provide nourishment for hungry fans.

With the U.S. and Belgium tied 0-0 at halftime, Pendergast was circumspect about the U.S. team’s chances.

“I’m always optimistic, but I like to think I’m reality-based as well,” Pendergast.

Elizabeth Ramos, 24, watched the match draped in an American flag even though she had been rooting for Mexico before they were knocked out of the tournament.

“This World Cup has been very different,” said Ramos, who came from Concord to watch in the company of a big crowd. “I think at this point anything goes.”

Ramos, who is a fan of the Mexican soccer team Chivas, recently quit her job.

“This is my fun-employment activity,” Ramos said.

“We decided to make a day out of it,” said Roach, who took the day off of work.

When asked of the U.S. team’s chances, he said, “I believe.”

Alas, belief was not enough. The U.S. lost to Belgium 2-1 in extra time and were eliminated from the tournament.

The Recreation and Park Department will screen the World Cup semifinals on July 9 and the final on July 13.