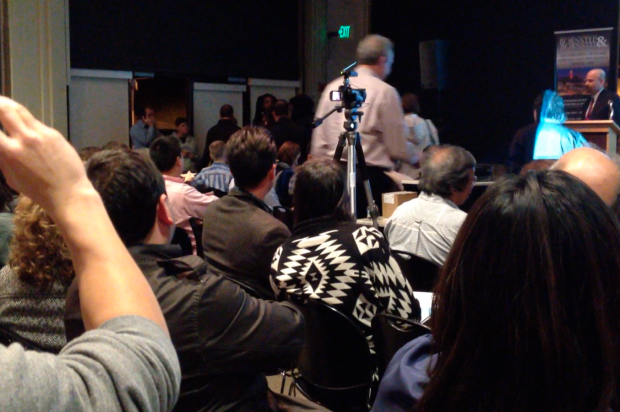 Please scroll down for an update to this story.

Not content to help landlords evict tenants from their homes and businesses, Daniel Bornstein at the Law Offices of Bornstein and Bornstein is using copyright claims to have criticism of his firm removed from YouTube.

You may remember the law firm for its efforts to help client Robert Shelton terminate the lease of longtime Lower Haight burrito joint Cuco’s. Bornstein & Bornstein also represent Ty Durekas, the landlord who had a change of heart after serving eviction notices to dozens of Section 8 subsidized tenants at 741 Ellis. Partner Jonathan Bornstein, Daniel’s brother, also made news after being fined $12,069 and harshly reprimanded by Superior Court Judge James J. McBride in February for his conduct in an ongoing eviction lawsuit.

The implication was clear that if I agreed to hold the story until after meeting with him, he’d agree to drop the claim.

But beyond notices sent to individual tenants, the firm may be best known for a series of “Eviction Boot Camp” seminars that it hosted starting in November of 2013 amidst the citywide housing crisis. The same day that the first seminar in November was covered critically by Melissa Bosworth for Broke Ass Stuart’s Goddamn Website, the firm began posting to Twitter. The online marketing campaign was stepped up in December with the first in a series of YouTube videos, with Daniel’s “How to Negotiate a Tenant Buy-Out in San Francisco” posted on December 20th—currently the most popular of the 21 videos on the firm’s channel.

During a seminar hosted at Fort Mason on January 16th, protestors disrupted the presentation to call for an end to evictions. I was on hand to cover the event, and filmed a video of the protest which I uploaded to YouTube from my seat in the audience. There were no stated or posted prohibitions against filming, I didn’t sign any release of rights or non-disclosure agreement, and none of the footage included Daniel Bornstein’s prepared remarks or materials. 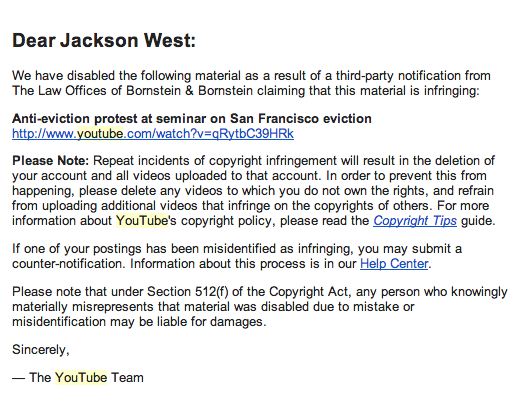 Yet last week I received an automated notice from YouTube that an infringement claim had been filed against my video under the terms of the Digital Millennium Copyright Act (DMCA). The stated reason for the complaint is that the work infringes on “Video not from YouTube: ‘Rent Control Seminar by the Law Offices of Bornstein & Bornstein.'” Presumably that’s in reference to the video recorded by the firm’s own camera, which is pictured in my video.

In submitting the complaint, Bornstein necessarily asserted “I have a good faith belief that the use of the material in the manner complained of is not authorized by the copyright owner, its agent, or the law.” However, every intellectual property attorney I’ve spoken to has agreed that the claim sounds specious at best. So either Bornstein should really tune in to some of the webinars on the California Bar Association’s continuing legal education calendar or he’s knowingly misrepresenting ownership of the footage.

In either case, the video will be offline for at least ten days while YouTube processes my counter-notice, punching an 854 pixel-wide hole in my reporting but more consequentially adding a Copyright strike to my YouTube account, which I rely on for promoting my work. The move also exposes me to a lawsuit if Bornstein chooses to challenge my counter-notice.

Frankly, I’d relish the opportunity, even if it meant litigating the case myself, pro se. While under Section 512(f) of the U.S. Code, The Law Offices of Bornstein and Bornstein could theoretically be held liable for damages and legal fees for misrepresenting their claim, as the case law stands it’s unlikely to cost the firm anything but time and fees for competent counsel. And thanks to the Streisand Effect, pressing their case could only possibly invite more attention to the protest and its coverage.

Contacted at his office on Friday, Bornstein at first offered no comment on the matter of the copyright claim. However, shortly after saying “We’ll let YouTube handle this,” he began to plea for empathy, arguing that he has feelings and just provides people with information and helps them become homeowners (never mind that he’s also a partner with landlord and management company Bay Property Group, which co-sponsored the seminars and is represented by the firm). He explained that he didn’t understand why he was being singled out, and there was nothing but to “throw my hands up” regarding the criticism, which he feels is “terribly unfair.”

If you choose to chase your fortune by helping landlords kick people out of their homes, ill-conceived efforts to silence criticism and control the press doesn’t really burnish your image as a professional.

But he didn’t stop there. Instead, he began asking to meet in person in order to be “presented as human, multi-dimensional.” I pointed out that issuing a takedown notice without contacting me first didn’t really offer me that same benefit of the doubt. I asked if he’d actually watched the video, which he didn’t confirm but instead indicated that he’d objected to the characterization of the incident in the description, complained about other videos of the event (which can’t be found on YouTube, suggesting he may have issued additional claims) and asked to be sent a copy.

Bornstein promised that if I agreed to meet he would consider dropping the matter, but when I made it clear that I reserved the right to publish a story before the meeting, he replied he’d then have to contact copyright counsel. While not directly stated, the implication was clear that if I agreed to hold the story until after meeting with him, he’d agree to drop the claim. Later that day, Bornstein even contacted tenant attorney and Appeal columnist Dave Crow in an effort to reach Publisher Eve Batey in another effort to secure a meeting, even though I’d already agreed to meet.

Look, if you choose to chase your fortune by helping landlords kick people out of their homes, ill-conceived efforts to silence criticism and control the press doesn’t really burnish your image as a professional who’s above the fray. You would think that a lawyer as knowledgeable as Bornstein is within his own area of the law would know to speak to qualified counsel before acting in another area of the law! You’d be wrong.

Which serves to illustrate Bornstein’s point: It’s important to remember that lawyers are human, too. So just because you get some legalese on fancy letterhead under your door or a copyright notice in your email, don’t assume that you have to feel intimidated. You can fight back, and there are people who can help. As it happens, I know some really good tenant and intellectual property attorneys, in case anyone needs a reference.

Update 2:32 PM: Shortly after joining Bornstein in his office on Polk Street this afternoon, the attorney asked that the meeting be off the record — instead of the interview on the record for the purpose of humanizing him and explaining his position he’d originally requested. He asked that a “neutral third-party” review the footage and offered to sign a letter to YouTube once I’d removed any portions he deemed infringing. He would neither confirm that he’d watched the video, nor if he had issued takedowns of other clips from the protest.

When I pointed out that a story was already online, along with the video, he rescinded the offer. However, seemingly confused over the difference between copyrights and privacy rights, he seemed intent on arguing that I wasn’t acting as a legitimate reporter for having attended the event and filmed the protest without notifying the firm first. I explained that I attended the event as a walk-in to see his side of the story both out of reportorial interest and as a counselor for the Tenants Union who regularly encounters his cases, only started filming once the protest broke out (along with other attendees), and contradicted his claim that it was an invite-only event — easily so, since in the footage I recorded, he laments that he can’t control who attends his events.

Update 7/22: This morning, the video reappeared on YouTube with the copyright strike removed. When it reappeared, I noticed a comment left by the Bornstein Law account three months ago asking for the video to be removed, a comment I was not aware of until this morning.

“If you choose to disregard this request,” the comment reads, “it may result in further litigation and further legal actions.”

Jackson West is a volunteer counselor at the San Francisco Tenants Union, where you should go for advice and support if you ever get a notice on Bornstein & Bornstein letterhead because there’s a good chance that it’s full of shit.