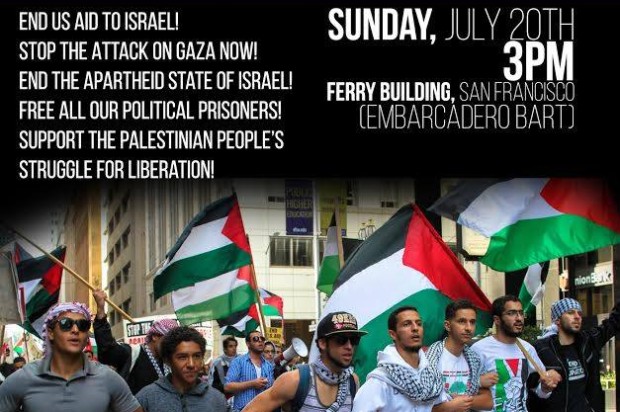 Hundreds of protesters in San Francisco marched together from the Ferry Building to City Hall this afternoon joining demonstrators in other cities around the world calling for an end to recent Israeli military action in Gaza.

Arab community groups and anti-war activists alike gathered at the Ferry Building in San Francisco around 3 p.m. today and held a symbolic funeral procession that flowed down Market Street to City Hall.

Dozens of police officers accompanied the group and blocked off roadways.

The march concluded with a rally on the steps of City Hall with hundreds of families and youth activists blocking traffic on Polk Street.

The speakers at the rally read off the names of those who had died as a result of recent military actions by Israel in the Gaza area of Palestine.

Organizers of the demonstration, including Arab Resource and Organizational Center, Arab Youth organization, and the ANSWER Coalition, spoke in Arabic and English, chanting, “Free, free, Palestine” and “Allahu Akbar,” which translates to God is Great.

Reem Salem, an 18-year-old San Francisco resident and Palestinian-American was an active participant in the demonstration this afternoon and spoke to the crowd with words of resistance.

“We will stop the racism and apartheid state of Israel, we will not stop. And we will continue to come out and have our voices heard,” Salem said.

Another protester at the demonstration, San Jose resident Mozi, said he became very sad seeing the images broadcast on television from Gaza.

He said the images of “small children being killed and families being shattered, mothers crying over the dead bodies of kids,” was difficult for him to see.

Mozi said he marched from the Ferry Building with the group and found the protest to be very peaceful, with no pro-Israel activists showing up.

United Nations Secretary-General Ban Ki-moon on Thursday called for “an immediate end to the indiscriminate firing of rockets by Hamas into Israel and Israeli retaliatory action.”

The secretary-general urged Israel “to do far more to stop civilian casualties.”

Rema Sider, 26, a Palestinian-American residing in San Francisco, said she was moved to join the protest today because the recent killing of civilians in Palestine had brought tears to her eyes.

Sider said she found out about today’s protest through friends and through Facebook.

The Jewish Community Relations Council, which represents synagogues and Jewish organizations in the San Francisco Bay Area, released a remark on July 9 stating that it supports “Israel’s right as a sovereign country to defend itself from relentless rocket fire, as well as its efforts to prevent further escalation and minimize casualties on both sides.”

Frank Lara, 30, an organizer with the Act Now to Stop War and End Racism, or ANSWER Coalition, attended the rally at City Hall this afternoon and said “now more than ever it’s important to highlight the genocidal campaign against Palestine, and Gaza in particular.”

He said it’s important to him that the public knows “just the amount of violence and the truth behind the killings being carried out by Israel.”

Lara also said he wants to see the United States “completely stop the aid to Israel and push for boycotts, and push for the prosecution of Israeli war crimes.”

Another demonstration against the military action of Israel is planned for this Saturday at 1 p.m. at San Francisco’s Justin Herman Plaza, near the Ferry Building, according to organizers.