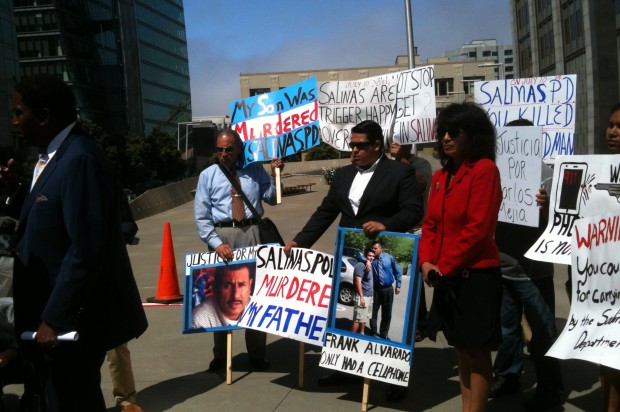 Civil rights attorney John Burris announced in San Francisco today that he has asked a special unit of the U.S. Department of Justice to look into the fatal shootings of four Hispanic men by Salinas police since March.

“Something is going on in that Police Department that has raised real questions,” Burris said at a news conference outside the Federal Building in San Francisco, where he was accompanied by relatives and supporters of the four men.

“We want to find out whether these shootings were a pattern of discriminatory law enforcement or four isolated incidents,” the Oakland-based attorney said.

“What we want is that the unjustified shootings stop. The community needs reassurance that there is not discriminatory law enforcement and that it is not open season on Latinos,” Burris said.

Burris said he sent his request Monday to Jonathan Smith, chief of the Special Litigation Section of the Justice Department’s Civil Rights Division.

The unit is one of 11 sections of the department’s Civil Rights Division. It does not conduct criminal prosecutions, but specializes in protecting civil rights in certain areas including citizens’ interactions with police. The section is skilled in looking for patterns of civil rights violations, Burris said.

Burris said that if the section takes up his request and finds that deadly force is being used in a discriminatory way, it could monitor the Police Department, set up an independent monitor or authorize revisions in the department’s practices.

The Justice Department had no immediate comment on its response to Burris’s letter.

If undertaken, a Special Litigation Section probe would be one of several ongoing investigations and initiatives related to the shootings.

Monterey County District Attorney Dean Flippo said on July 10 that his office, at the request of Salinas police Chief Kelly McMillin, has directly taken over the investigation of the fatal shooting of Frank Alvarado, 40, that day.

The other fatal police shootings, which occurred on March 20, May 9 and May 20, are being investigated by the Police Department. In all four cases, the district attorney will decide any officers should be prosecuted.

In May, McMillin announced that he asked the Justice Department’s Community Relations Service to send a conciliation specialist to Salinas to facilitate community dialogue following the shootings.

McMillin also said he would send copies of reports on the May 9 and May 20 shootings to the FBI’s San Francisco office and the Justice Department’s Civil Rights Division to determine whether the cases require further investigation.

Burris said he represents Alvarado’s family and the family of Carlos Mejia, 44, who was shot and killed by officers on May 20 after he allegedly pointed the blades of gardening shears at them.

Burris said that Alvarado, who had been released from prison and “was trying to turn his life around,” was carrying a cellphone, which police apparently interpreted as a weapon.

Alvarado’s father, Jose Frank Alvarado, said, “There are very, very bad things in Salinas. Brutal, that’s the word for it. It sounds like ‘kill now and ask questions later.'”

“What we’re asking for is justice, I believe justice is going to be done. The truth is going to come out,” the father said as he held a sign with a large photo of his son.

Alvarado’s sister, Angelina Garza, fought back tears as she said, “He was lost but will not be forgotten. My brother needs justice.”

In the other two shootings, Osman Hernandez, 26, was killed after he allegedly pointed a lettuce-cutting knife at officers on May 9. Angel Ruiz, 42, was shot multiple times on March 20 after he lifted his shirt and displayed a device that turned out to be a replica firearm, according to police.

The incidents have prompted several protests and demonstrations in Salinas. In a demonstration on May 21, a bystander, Constantino Garcia, 23, was shot and killed by an unknown assailant.

A Salinas police spokesman was not immediately available for comment.

McMillin said in May, “I welcome any investigation of any allegation of misconduct. The Salinas Police Department is an open book.”