Bellator MMA Black Box Doomsday Preppers Food Fighters Hell's Kitchen Hotel Hell Manhattan Project Runway The Meltdown with Jonah and Kumail UFC on FOX Who Do You Think You Are? by Paolo Sambrano | July 21, 2014 8:58 am | in Culture | 0 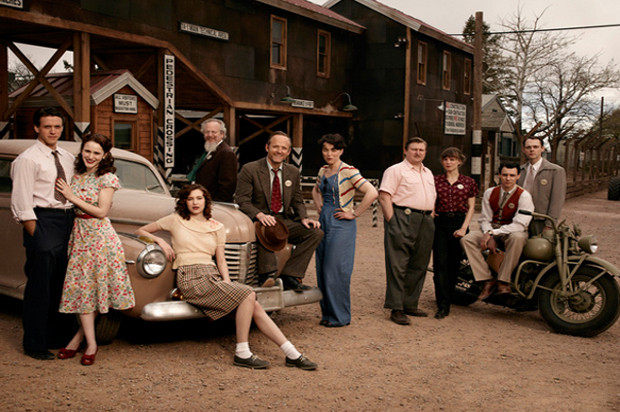 Hospitality, food, and face punching, that’s what I got for you this week.

Monday, July 21
Hotel Hell (9pm, FOX, season premiere)
Travel Channel’s’s Hotel Impossible was a spin-off of Food Network’s Restaurant Impossible (a spin-off of Dinner Impossible, with Robert Irvine, but also an attempt to reverse-engineer Gordon Ramsey’s Kitchen Nightmares). What I’m trying to say is that Gordon Ramsey hosting a show about failing hotels is the reality snake eating its own tail.

Tuesday, July 22
Food Fighters (8pm, NBC, series premiere)
Adam Richman may have gotten his newest show yanked from the Travel Channel schedule for his Instagram rant, but that sure didn’t stop NBC from keeping him around. The man who became famous for eating an absurd amount of food on TV (and drawing the ire of Alton Brown), hosts this food competition show pitting family recipes against professional chefs. The one thing I can say about this show is kudos for not going with a Game of Thrones pun, although they might owe Dave Grohl a nickel every time this show airs.

Wednesday, July 23
Who Do You Think You Are? (9pm, TLC, season premiere)
This adaptation of the British series where celebrities find out about their family lineage returns, because even death will not stop us from getting to know everything about our national resource of celebrities.

The Meltdown with Jonah and Kumail (12:30am, Comedy Central, series premiere)
It’s technically Thursday morning, but come on. This is an adaptation of the live stand-up show out of the back of Meltdown Comics in LA, hosted by Jonah Ray (The Nerdist) and Kumail Nanjiani (Silicon Valley, The Indoor Kids podcast).

Hell’s Kitchen (8pm, FOX, season finale)
Gordon Ramsey will elevate some fucking donkey to be honored to be the chef in some resort in Nowheresville, Nevada.

Doomsday Preppers (9pm, National Geographic, season premiere)
Am I giving preppers too much credit when I refer to it as a ‘subculture’ the same way furry is a subculture? Because all I see are people who are banking on the world going to shit because they don’t have much to look forward to in the present. If the FBI recognizes juggalos as a gang, I cannot wait for preppers to be lumped in the same boat.

Tangential, but can we have a moratorium on people in post-apocalyptic shows saying the apocalypse was the best thing to have happened to them because they couldn’t function in the old, gone world or whatever? Lastly, I maintain that people who always talk about the zombie apocalypse would be killed within 48 hours of an actual zombie apocalypse.

Friday, July 25
Bellator MMA (9pm, Spike, summer season premiere)
This will be the show on the air since founder and President Bjorn Rebney was ousted from the position and replaced with former San Jose based Strikeforce President Scott Coker. Hopefully Coker will be able to take what he learned building Strikeforce from a kickboxing promotion into a promotion arguably second to the UFC (before the UFC bought them out, natch). This card will feature middleweight and welterweight tournament finals (a format that will hopefully be phased out in the future) and a bout between the New York Badass Phil Baroni and Karo “The Heat” Parisyan.

Saturday, July 26
UFC on FOX (5pm, FOX)
The UFC returns the SAP Center in San Jose, and I ought to be in attendance! In the main event welterweights Matt Brown versus Robbie Lawler in a main event for a bevy of ultra violence. While we are paying for a five round main event, we will only be needing a couple of rounds, given the violence these two are known to dish out. This is a number one contender bout, with the winner taking on current welterweight kingpin Jonny Hendricks, although in this sport that doesn’t mean much, until the cage door closes and the match is actually on the way.

Sunday, July 27
Manhattan (10pm, WGN, series premiere)
Growing up, I remember WGN as a network to watch Charles in Charge and Captain N and the Game Masters reruns. After Salem, WGN’s first foray into original scripted programming comes Manhattan. Which is a period piece about the inhabitants of Los Alamos, the town where they developed the atomic bomb. Which, being reductive, feels like the Halt and Catch Fire of atomic warfare, which was trying to reverse-engineer Mad Men. Or maybe it’s Masters of Sex, but with the atomic bomb instead of sex.