Appealing TV: The Killing, Gravity Falls, and Sharknado 2: The Second One

Crossbones Gravity Falls Halt and Catch Fire Hell on Wheels Knife Fight Nathan for You Running Wild with Bear Grylls Sharknado 2: The Second One The Bachelorette The Honorable Woman The Killing The Quest by Paolo Sambrano | July 28, 2014 7:47 am | in Culture | 0 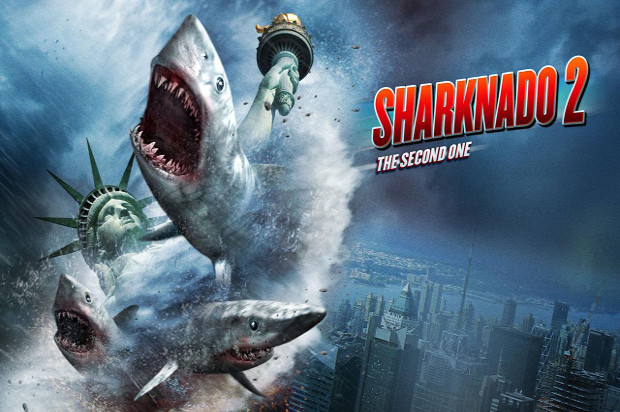 The yearly pop culture feed dump from our corporate overlords known as Comic-Con (Sundance, but for people who wear Doctor Who t-shirts where The Doctor is portrayed as Hobbes and Amy Pond as Calvin) ended yesterday. My first (and so far only) Comic-Con was in 2006, where most notably I was booed off the microphone during the Q & A portion of the Stargate Atlantis panel in the crown jewel of Comic-Con, Hall H. The long-short of it, I asked one of those stupid canon question (in the pilot episode you state that intergate travel is impossible from the Pegasus galaxy into the Milky Way without a ZPM — you get the picture, shut up I was only twenty), someone from the audience shouted out the answer, and I ended up apologizing (“I’m sorry I’m not good at anything else!”) to the cast and crew of Stargate Atlantis while trying to simultaneously finish my question. After the boos started and I walked off the mic, I tried to own my shame by pumping my fist in the air and exclaiming “San Dimas High School Football rules!” to which someone from the audience stood up, and proceed to Jack Ruby my self-esteem by asserting in front of 5,000 other people that I, in his words, “suck.” I couldn’t watch Stargate Atlantis again until the show went off the air years later.

Shame aside, the stimulation of SDCC lead me to lock myself in my room for a week after getting back.

Tuesday, July 29
Knife Fight (10pm, Esquire Network, summer season premiere)
A friend asked me to describe what Esquire Network was and the best I could come up with was: Esquire Network is Spike TV but for college-educated males who got into, but subsequently dropped out of law school, but got a sweet sales gig from their fraternity bro and have plenty of disposable income.

Knife Fight is a food competition show hosted by Ilan Hall, who won season two of Top Chef (“keep making your foams and go cry in a corner”) but tries to have all the young people aesthetic of a Terry Richardson Vice shoot.

Wednesday, July 30
Penn and Teller: Fool Us (8pm, CW, series premiere)
Why not have a magic competition show where the winner gets to perform with Penn and Teller in Vegas? Why not?

Sharknado 2: The Second One (9pm, Sy Fy)
“So bad it’s good” is a valid aesthetic, of course, but what everything that the The Asylum (the production company that produced Sharknado 1 and 2, and all those awful straight-to-DVD “mockbusters”) does just feels like the Instagram of shlock cinema, calculated and put-on. Sharknado wasn’t even so bad it’s good, it was just so bad, it was just kind of there. There’s no shark to jump because the fucking shark is part of a goddamn tornado.

I used the “bully manipulating the special needs kid to call the lunch lady the c-word” metaphor to describe IFC producing a third round of chapters of Robert R. R. Kelly’s Trapped in the Closet, but Sy Fy and The Asylum are the bullies, Sharknado 2 is the manipulation, and we’re the special needs kid calling the lunch lady the c-word. Or, in keeping with the marine life theme of Sharknado 2, we’re the fucking sea lions clapping up whenever we see some low hanging fish. Only the clapping is some entry level swarm.

Anyway, Ian Ziering and Tara Reid return to do it again, brother, along with a slew of other “celebrities.”

Thursday, July 31
The Quest (8pm, ABC, series premiere)
I’m still a little salty ABC decided to not bring back my beloved (and batshit crazy) Whodunit from last summer instead of The Quest, which is The Amazing Race but with contestants thrust into the world fantasy LARPing and cosplaying. If Whodunit : CSI :: The Quest : Game of Thrones (or Lord of the Rings)

The Honorable Woman (10pm, Sundance, series premiere)
Maggie Gyllenhaal dons a short haircut and a British accent in this BBC event series imported to Sundance, in what I’m just gonna call artisanal Homeland. However, because it has to do with paranoia and espionage, I will officially call it “my jam,” as the kids on Tumblr would say. At worst, I will pretend to like it because the accents can hide shoddy storytelling, but that’s just me being a presumptive cock.

Friday, August 1
The Killing (Netflix, season premiere)
The Killing is a show about sadness and rain and red herrings that didn’t find its stride until last season when AMC removed it from the schedule. But leave it to Uncle Netflix to give the show one final season. The fourth season of the murder police show will deal with the fallout from the events of last season’s finale, along with the murder at a military school, which will be an exploration of power and privilege. Ooh, dead rich white people!

Gravity Falls (9pm, Disney, season premiere)
Creator Alex Hirsch was born in Piedmont (The Eagleton to Oakland’s Pawnee) and is only a couple of years older than me, so you will have to excuse me if this turns into a petty, insecure existential pit of despair. But seriously, a sophisticated LOST and X-Files styled mythos grafted on top of an exuberant and zany cast of characters make this great viewing. Featuring the voices of Jason Ritter and Kristen Schaal.

Saturday, August 2
Crossbones (9pm, NBC, season finale)
This event series starring John Malkovich as the pirate Blackbeard wraps up its run on the Davey Jones Locker of television, Saturday night. Davey Jones Locker, you see, because the show is about pirates, and, I’ll stop right there.

Hell on Wheels (9pm, AMC, season premiere)
The AMC western about the building of the transcontinental railroad returns for a fourth season. While it isn’t the ratings juggernaut of the Walking Dead, and doesn’t have the critical shine of a Breaking Bad and Mad Men, it is a steady earner for AMC, and stars Colm Meaney (Chief O’Brien from Star Trek) and Common (Common, from Common).

Halt and Catch Fire (10pm, AMC, season finale)
This show had a lot going for it from the announcement and the pilot, all until the second episode when it devolved into a cacophony of a bunch of unlikeable people operating in a perpetual state of histrionics, squandering the intriguing premise and setting (although to be fair it did leave us a pretty rad opening title sequence). The show’s ratings were awful during its run and we can probably expect this to not come back for a second helping. Which is a double shame, because the last couple of episodes it learned what makes for a good and engaging show. Maybe the best thing to come from this show is Lee Pace joining the cast of Hannibal next season.