Appealing TV: Extant, The Strain, and Masters of Sex 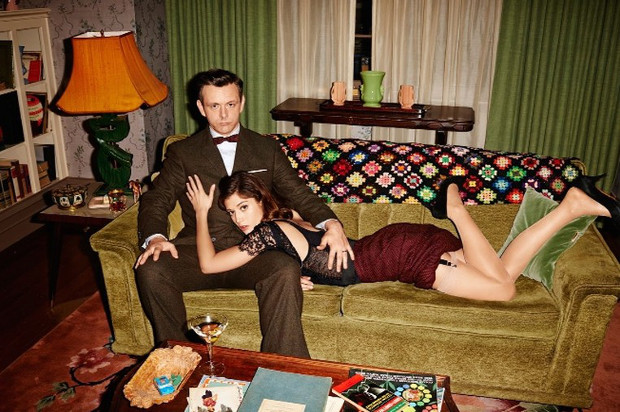 The television faithful continue to play the waiting game during the summer season for news to trickle down. From the release of the trailer for the fourth and final season of The Killing (on Netflix, naturally), to announcements for new shows on the horizon (Neil Gaiman’s American Gods coming to Starz, or Showtime ordering a comedy pilot from J.J. Abrams and Cameron Crowe with My So-Called Life creator Winnie Holzman serving as showrunner), to reports that Travel Channel has pulled Adam Richman’s new show, due to a rant on Instagram, we can only wonder:

Tuesday, July 8
The Chase (8pm, Game Show Network, season premiere)
Game shows hold a special place in my heart, as I grew up watching reruns of Press Your Luck, Jokers Wild, Tic-Tac-Dough, Supermarket Sweep, $64,000 Pyramid, etc etc etc. While the game show genre mounted a renaissance during the Who Wants to be a Millionaire era, the format hasn’t been able to mount a comeback since last year’s ill-fated Million Dollar Quiz. So kudos for Game Show Network for putting an honest to goodness game show in this day and age.

Wednesday, July 9
Extant (9pm, CBS, series premiere)
Halle Berry jumps to TV in another mini-series event, executive produced by Steven Spielberg (if we’re all being honest with each other, this means less and less as time goes on). Berry plays an astronaut who, after coming home from a solo year-long mission, finds herself pregnant. There’s also something about her robot son, and something about an impending apocalypse. Which is one robot son and one impending apocalypse too many, and makes me think that Spielberg hasn’t really let go of 2001’s A.I. Artificial Intelligence with Haley Joel Osment, in the same way Edward James Olmos hasn’t let go of Battlestar Galactica.

The Bridge (10pm, FX, season premiere)
The Bridge came in with an intriguing setting in El Paso/Juarez, and great acting from its two leads, Diane Kruger and Demian Bichir. But most of its freshman season paraded by as a by-the-book procedural, serial killer hunt. Which was kind of a let-down, to be honest! Refreshing though is its showrunner admitting that in order for this show to get made, they needed to run through the serial killer storyline. In fact, wrapping it up with two episodes left in the first season allowed the last two to act as a lightweight reboot for the series, and brought in something that Grantland’s Andy Greenwald called “The Weird Bridge.” Which is perfect for this show, and has me with very high hopes for the second season.

Welcome to Sweden (9pm, NBC, series premiere)
This Swedish fish-out-of-water sitcom comes to us from Greg Poehler (the goddess Amy Poehler’s younger brother) and is based on his actual experience of moving to Sweden to marry his wife. He also stars in the sitcom. You can expect guest cameo appearances by Amy Poehler, Aubrey Plaza, and Will Ferrell during its ten episode run.

Working the Engels (9:30pm, NBC, series premiere)
Taking a gander at its upcoming fall schedule, NBC has throughly rinsed its hands and thought fuck it at trying to rebuild its Thursday night comedy ‘must see TV block.’ The pairing of Welcome to Sweden and Working the Engels is some kind of one last shrugged hurrah before the 2014/2015 season starts. Anyway, Working the Engles is about a family of ne’er-do-wells trying to save their deceased patriarch’s law firm. Hijinx and bonding moments ensure. Also, Jason Priestley directs a couple of episodes this season, and I just want to take this moment to say that I really enjoy his work on Call Me Fitz.

Friday, July 11
Hemlock Grove (Netflix, season premiere)
Hemlock Grove was the third series to premiere on Netflix (after Lilyhammer and House of Cards, respectively), and it was just kind of there. Aside from Eli Roth throwing his name as Executive Producer, it’s this kind of tone-deaf supernatural horror in the vein of a True Blood. If this show does come back for a third season, will it fill the True Blood shaped bite marks in society’s neck after True Blood ends this season? And only then we will be able to appreciate it as the Malt O Meal’s Cocoa Dyno-Bites Cereal to True Blood’s Cocoa Puffs?

Saturday, July 12
Deep Fried Masters (10pm, Destination America, season premiere)
Included in this week’s round-up because of the audacity that a show about people who deep fry foods could warrant a second season. Although I will say that I am surprised that the show deftly inserted some lightweight Shark Tank jargon talk into the proceedings of watching people deep fry cheesecake.

Sunday, July 13
Ray Donnovan (9pm, Showtime, season premiere)
Ray Donnovan proved that it takes more than a brooding white male antihero who makes morally ambiguous life decisions in a morally gray world of excess to churn the prestige butter. And good, frankly. This rote, fill in the blanks dramatic series featuring Liev Schreiber as an LA fixer to the stars misses the mark at best, and is at worst pandering to the brooding white male antihero zeitgeist on television. But let me pose this question to you, have you ever wanted to see Jon Voight fucking black women? Boy, do I have a show for you! (spoiler the show is Ray Donovan, which is the only thing it seems to contribute to the party).

Masters of Sex (10pm, Showtime, season premiere)
The second season of the impeccable period drama focusing on human sexuality pioneers William H. Masters and Virginia E. Johnson (portrayed by Michael Sheen and Lizzy Caplan, respectively) returns. Which means a return to wonderful typeface puns, and a reminder that while the real life Masters and Johnson were doing work in a time when everyone’s knickers were in a bunch about sexuality, they did have that whole homosexuality conversion thing from 1968 to 1973. Also, please don’t confuse Masters of Sex with my upcoming show Masters of Ska which is about the third wave of ska as seen through the eyes of the high school kids who skanked through it.

The Strain (10pm, FX, series premiere)
Let me drop some real talk on you, but I cannot be fucked to watch The Strain. If you’re a huge Guillermo Del Toro mark (who co-created, executive produced [along with LOST/Bates Motel’s Carlton Cuse], and wrote the pilot), than god bless, I validate the hell out of that, but goddamn. I cannot be fucked to sit through another sci-fi/horror end of the world vampire-zombie-pandemic scenario. And that creepy fucking eye-popping worm poster isn’t helping matters at all (I’m guessing everyone reading this is thankful I decided to go with Maters of Sex as this week’s image than The Strain, because I am). While I’m happy this pilot was the closing night presentation for last June’s ATX Television Festival, I was told the pilot to The Strain was very pilot-y, although the creature design is great (which is what Del Toro brings to the table anyway).