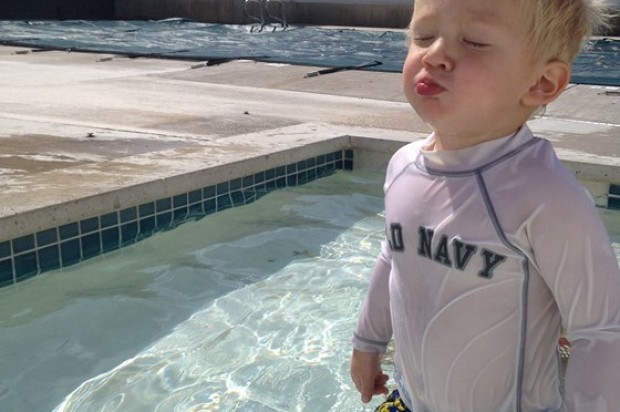 A toddler visiting San Francisco from Utah with his family died in a freak accident in the city’s Fisherman’s Wharf area Friday afternoon, a police spokesman said.

Police responded around 11:30 a.m. Friday to the 200 block of Jefferson Street after a dolphin statue outside a store toppled onto a 2-year-old boy on vacation with his family, San Francisco police spokesman Officer Gordon Shyy said.

Apparently the boy had been playing on the statue just outside the store when it fell on him, Shyy said.

Medical crews arrived and the boy was taken to San Francisco General Hospital, where he died later that afternoon, Shyy said.

Shyy said the boy was with his mother, father and an older sister and possibly other family members.

The boy was identified as Kayson Shelton (pictured above), of Draper, Utah, which is near Salt Lake City, according to the San Francisco medical examiner’s office.

Shyy said the business was cited for placing an object or merchandise on a sidewalk where it impedes pedestrian traffic.

An online fundraising website has been set up for Kayson’s family to help with funeral expenses and other costs.

Donations can be made online to his parents Toni and Scott Shelton at http://www.youcaring.com/memorial-fundraiser/kayson-shelton/188172.