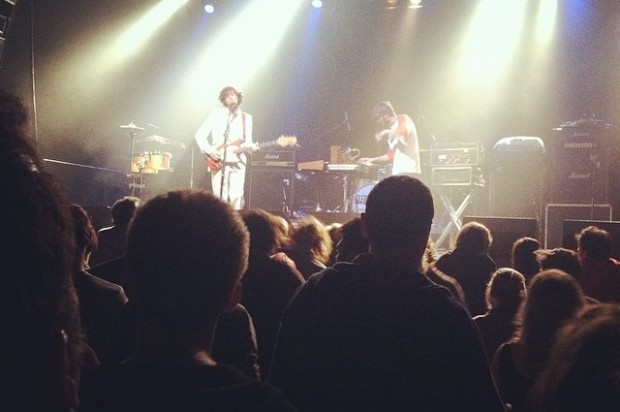 Congratulations, SF: you helped keep Electric Six from calling it quits some eight years ago. Metropolis label head Dave Heckman saw the band when they were at a crossroads and it was at his urging that Electric Six went from unsure and unsigned to being backed by a fully supportive and highly varied record company.

“He’s done so much for us and is really a big part of why we’re doing this. Before, we weren’t sure about even putting up album number three,” frontman Dick Valentine (nee Tyler Spencer) tells the Appeal. “I love San Francisco. Our stop [at the Independent] really feels like the anchor of this tour.”

The stop comes in the middle of a month and a half nationwide tour that, while still grueling, is nothing compared to Electric Six typical seven to eight week runs. Much has changed for the band since forming in Detroit in 1996. For one, New York City is where Valentine calls home. “I also have a daughter,” Valentine says. “That’s why we don’t go on longer stints.”

For all the changes they’ve made, Electric Six stays consistently true to their roots, steeped heavily in the pop and radio rock of the 70’s. Valentine is quick to cite Bay Area musicians Greg Kinh and Journey as particular influences, back when he was just pondering the proper constructs of a pop song around age nine or ten. The excess of such tunes make up a large portion of Electric Six’s over the top aspect.

It’s no real surprise that there is little serious about Electric Six, though Valentine’s nonchalant attitude and genuine love for his bandmates and career is incredibly disarming. Despite the transparency and connectivity of social media in which you’re only a tweet away from an interaction with someone notable enough to be verified, most rock musicians ascribe an air of distance and mythos that only makes them seem aloof.

Valentine and co, conversely, want everyone in on the absolute fun that is the Electric Six experience. “We don’t want you to be all tied up in knots and having a bad time at our shows. If you are, that’s on you,” Valentine says.

Admittedly, it’s pretty hard to mean mug through a show to a band whose repertoire includes the song “Gay Bar.” A quick listen and viewing of their live album Absolute Pleasure and their DVD Absolute Treasure acts as the perfect primer for what promises to be a, well, electric performance at the Independent this Thursday.

As for future projects, Valentine says the band has never been out to make the perfect album. For Electric Six, it’s all about momentum. “I tend to liken us to a shark. We’ve got to keep swimming or we’ll die.”

Keep Electric Six going strong at their show this Wednesday at the Independent. Purchase tickets here.