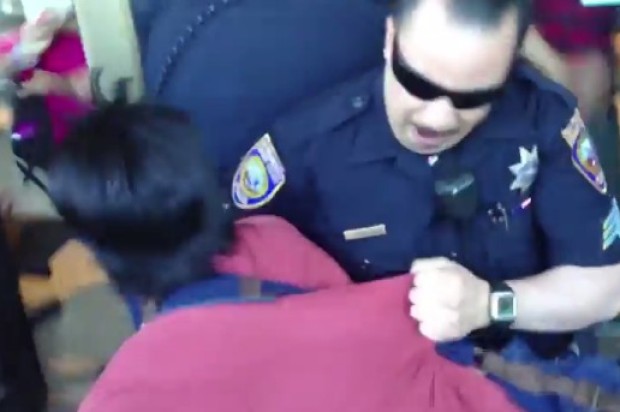 Students who said they were seriously injured and arrested at a protest at City College of San Francisco in March today filed administrative claims against the city and the community college district, according to their attorney.

In the claim, CCSF students Otto Pippenger and Dimitrios Philliou said they were injured during a demonstration at the main campus off of Ocean Avenue on March 13, according to their attorney Rachel Lederman.

Lederman said both her clients are continuing to receive medical care following the demonstration, where students called for the resignation of City College special trustee Robert Agrella and demanded changes to tuition policies and salary schedules.

In July 2013, the Accrediting Commission for Community and Junior Colleges announced its decision to revoke the school’s accreditation effective later this year because of ongoing problems with its finances and governance structure.

That same month, the California Community Colleges board of governors stripped the school’s elected board of trustees of its powers and installed Agrella as special trustee, giving him unilateral power in overseeing the school.

After the organized rally on March 13, demonstrators marched to Conlan Hall, the school’s administration building, where the group was told the building was closed.

Police were called to the scene when students attempted to enter the building. Lederman claims police responded with violence, with officers breaking both of Pippenger’s wrists with baton blows and punching him in the back of the head, slamming his face into the concrete and giving him a concussion.

Philliou, she claims, was thrown to the ground, choked and pepper sprayed.

Both students were arrested and held in custody until early the next morning. Charges were later dropped for both men, she said.
However, she said the school has threatened disciplinary action against the pair.

Lederman said today’s claim is a precursor to a federal civil rights lawsuit that will seek compensation and an order to require more police training for demonstrations.

The city and school district have 45 days to respond to the claim, according to Lederman.

The day after the rally, City College Chancellor Arthur Tyler issued a statement explaining that campus police told protesters they would not be able to enter Conlan Hall due to safety concerns.

School officials said six campus police suffered minor injuries during the protest and one came in contact with pepper spray after students allegedly stormed the building.

The Save CCSF Coalition, made up of students, staff, faculty and community members working with City College to retain the school’s accreditation, is asking for the chancellor to apologize and recognize the police violence that occurred during the rally.

Lederman said the altercation could have been prevented and the Save CCSF Coalition says the demonstrators wanted a chance to talk to the chancellor and special trustee in light of several policy and administrative changes stemming from the accreditation fiasco.

Lederman’s office has performed its own “extensive investigation,” talking to 25 students and faculty members and analyzing videos taken at the rally and during the ensuing violence, she said.

“It’s been no secret we’ve been investigating,” she said.

“Everyone knows what’s going on.”

She said the school claimed they would perform their own investigation into the March protest.

She said the forthcoming suit is separate from any legal action taken by students, faculty members and the city attorney’s office over the accreditation review process that lead up to the revocation decision.

A San Francisco Superior Court judge in January issued an injunction preventing the accreditation from being revoked as planned this July 31 and until after a trial can be heard on the city attorney’s lawsuit.

A spokesman for City Colleges said officials could not comment on pending litigation, but since the protest, the chancellor has taken steps to address the climate on campus.

An independent review of the protest is underway, a task force looking into civil discourse and the campus climate was appointed, and faculty, staff, students and administrators have started meeting. City College also hosted three forums on campus in the weeks following the protest, school officials said.

School officials said more of those meetings may be hosted on campus in the coming weeks.