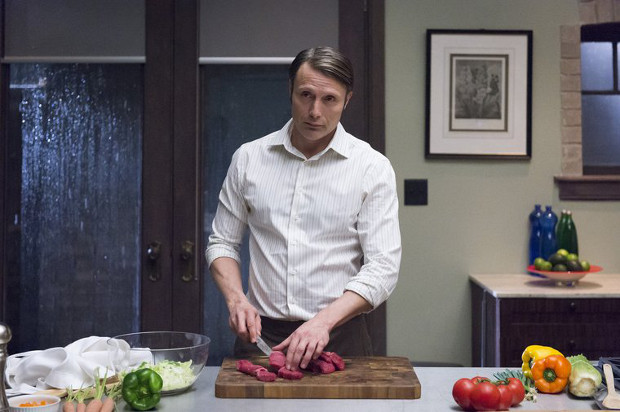 This week the annual network upfronts were held, where the networks woo Johnson or Johnson or Taco Bell so they can inject secret Illuminati iconography into your programming. Also, to quote David Letterman at the CBS upfront, “I’ve been coming to these for 30 years. I have no idea who you people are.”

It also brings with it the first trailers for the new slate of programming that will be making its debut in autumn (Largely replacements for the ones that won’t be returning that we all still haven’t finished mourning just yet). A couple that come to mind for me: ABC’s Fresh Off the Boat, based on the memoir of the same name by NYC restauranteur Eddie Huang, CBS’s Battle Creek (Vince Gilligan’s follow-up to Breaking Bad, actually was developed by him ten years ago. Also won’t be debuting until mid-season). Lastly, while technically cable, I was really impressed with TBS’s Angie Tribeca, starring Rashida Jones, and created by Steve and Nancy Carell. Check out The Hollywood Reporter for a good upfront round-up.

(We’re still working somewhat super sized listings, will be doing abbreviated version like last week. An asterisk means it will not be returning in the autumn.)

Monday, May 19
The Maya Rudolph Show (10pm, NBC, series premiere)
Maya Rudolph anchors an honest-to-gosh variety show, a special that could very well be a series. Featuring Andy Samberg, Kristen Bell, Fred Armisen, Sean Hayes, and musical guest Janelle Monáe. Also, Maya Rudolph will be performing with Gretchen Lieberum as part of her Prince tribute duo Princess at the Regency Ballroom on Wednesday May 21. I hope this does well so it can only add fuel to my ‘please bring back Viva Variety‘ fire.

I Wanna Marry “Harry” (9pm, FOX, series premiere)
What were you expecting, another Ken Burns documentary about sharecropping? THIS. IS. SUMMER. SEASON (and FOX, to boot). Jazz isn’t the only true American art form out there! I Wanna Marry “Harry” is in the grand American tradition of obsession with
British royals and duping people on TV. I’m calling this the spiritual successor to Joe Millionaire, like it or not, but I’ve been needing to find more ways to insert the phrase ‘spiritual successor’ in my life because I like the way it rolls off my tongue.

Wednesday, May 21
Mixology (9:30pm, ABC, season finale*)
I remember at the TCAs, Mixology was touted as a sort of LOST but in a singles bar. Get the fuck out of here.

Labyrinth (8pm, CW, miniseries premiere)
After last week’s Rosemary Baby miniseries re-adaptation or whatever, I was fully prepared to flip whatever table (real or metaphorical) in front of me with whatever snide, faux outrage at the state of adaptions and remakes when I saw the listing for CW’s miniseries Labyrinth (which ends on Friday), assuming it was just a rehash of the David Bowie classic. Well, I was only half right (or wrong). It’s not an adaptation of the 1986 Jim Henson movie, but an adaptation nonetheless, of the Kate Mosse best-seller, which ping-pongs between two women in modern and medieval France and their united search for the Holy Grail. Carry on, then.

Saturday, May 24
Happily Never After (9pm, ID, season premiere)
Leave it to Investigation Discovery to continue to pump out sleazy true crime re-enactments with punny show titles. But real talk, its pun game is pretty weak, on some C- level. Gotta get on Bar Rescue’s level.

Sunday, May 25
Mad Men (10pm, AMC, Spring season finale)
I, for one, cannot wait for the legacy of Mad Men to force “From the network that brought you Mad Men,” before introducing the trailers to Untitled Billy Corgan Wrestling Project or Chris Hardwick All-Star Celebrity Bowling show.