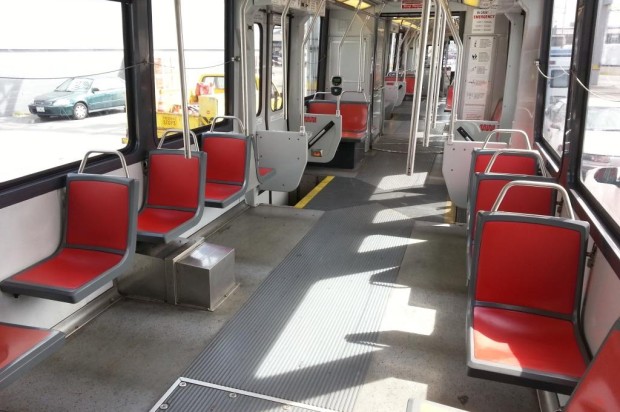 Riders on two San Francisco Municipal Railway trains will have a chance this month and next to test out a new seat arrangement on the fleet’s light-rail vehicles.

The test program will launch Monday on one car on the N-Judah Muni Metro line and run until May 30.

Another car will be converted into the new arrangement on the L-Taraval between June 2 and June 13.

The pilot program comes with a $30,000 price tag and is being used to test ways to maximize space on trains, Muni spokesman Paul Rose said.

Removing the seats will make room for at least 10 more passengers to stand, according to Muni officials. There will be space for a total of 26 standing passengers.

According to officials, for each seat removed two more standing passengers can get onboard.

During the pilot, riders who experience the new configuration are asked to give their feedback on an online survey.
The survey and more information about the pilot program are available at www.sfmta.com/projects-planning/projects/light-rail-vehicle-lrv-seating-pilot.

Muni officials will be counting and surveying passengers during the program to gather data about capacity and passenger opinions.