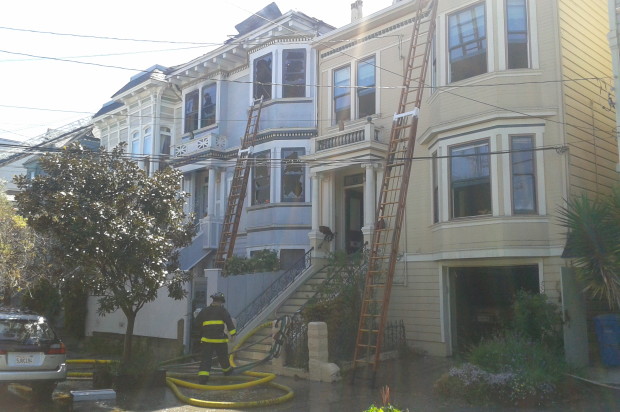 A three-alarm fire in San Francisco’s Duboce Triangle neighborhood this afternoon has been extinguished after damaging three buildings and injuring one firefighter, fire officials said.

The fire was reported at 1:34 p.m. in the first block of Walter Street between Duboce Avenue and 14th Street. Firefighters called for a second alarm at 1:42 p.m. and a third around 2 p.m.

Smoke poured from the roof and filled the streets near Duboce Park as neighbors and residents looked on at the destruction.
The fire started behind a duplex at 34-36 Walter St. before engulfing the home and spreading to two adjacent buildings, fire officials said.

Firefighters made an aggressive interior attack and kept the fire mostly contained to the first building, but there was smoke and fire damage to houses to the right and left, fire officials said.

They tore apart the roof of the house on the right as flames flickered on the edges of the shingles.

The fire on the two adjacent buildings was controlled by 2:49 p.m., fire officials said, but it took until 3:25 p.m. to fully control the fire at the duplex.