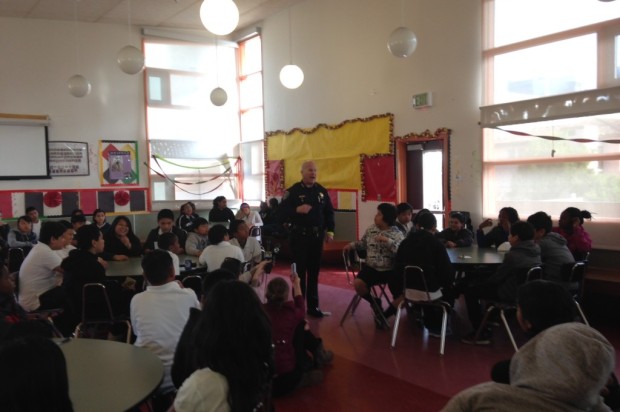 About 50 sixth-graders at the Bessie Carmichael Filipino Education Center middle school campus, located at 824 Harrison St., listened to the police chief give advice on how to stay safe while walking, biking and being in a car while on city streets.

Suhr told students that the wristbands, along with walking in large groups and in light-colored clothing, would help drivers see them.

He encouraged the children to not only look both ways before crossing the street, but also to make eye contact with the driver.

“Everyone’s in a hurry and that makes it less safe,” Suhr said.

He also told the students to make sure parents and other family members never use a cellphone while driving.

As he handed out the wristbands that have “Ped Safe” printed on them, Suhr said the bands will help the students “shine bright like a star.”

Suhr shared the city’s goal to have “nobody get hit by a car ever in San Francisco.”

After a particularly deadly year for San Francisco’s pedestrians and cyclists in 2013, the city has implemented “Vision Zero,” an initiative to have no traffic deaths by 2024.

There have already been seven fatal pedestrian collisions in the city since the beginning of this year.

Suhr said compared to this time last year, traffic citations are poised to be up by about 70 percent.

Those tickets are being issued for pedestrian infractions such as jaywalking or walking against a light, as well as unsafe driving and biking behaviors including speeding, making dangerous turns, failing to yield to pedestrians and using a cellphone while driving.

The chief said the increased enforcement is targeting everyone using the roadway—not just drivers.

“Everyone has got to be better,” he said.