“You gave all our money away”: City Workers Protest Twitter Tax Break 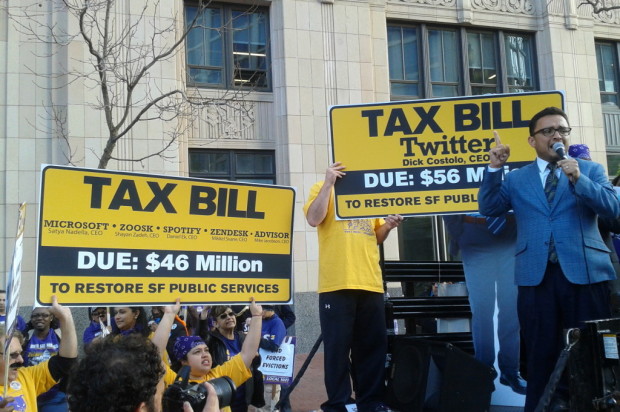 Tax breaks by San Francisco for Mid-Market employers were the target of a rally outside City Hall this afternoon by a public employee union that claimed the tax breaks prevent the city from funding important services like staffing 911 dispatchers and hospitals.

The Central Market and Tenderloin Area Payroll Tax Exclusion went into effect in 2011 and exempts companies from payroll taxes for six years over an eight-year period for any new jobs added.

The tax breaks were intended to bring in new companies and jobs to the Mid-Market area, making up any revenue lost through other taxes and increased economic activity.

But Service Employees International Union Local 1021 argues that the tax breaks amount to a handout to technology companies at a time when valuable city services are still suffering from cutbacks imposed during the recent recession.

Ron Davis, a 911 dispatcher for the last 13 years, said at today’s rally that dispatchers are short staffed and unable to comply fully with state mandates on 911 response times because the city cut back on hiring two years ago.

Davis said that with fewer employees coming in, staffing has dwindled through attrition and only 10 or 11 employees are there at a time to answer the roughly 3,500 calls per day.

The union’s complaint, Davis said, is not that the city gave the tax breaks, but that afterward the city has argued that it doesn’t have the funding to restore cuts to social services.

“You gave all our money away,” he said.

The union also said that short staffing has led to problems at area hospitals and has created unsafe conditions, pointing to a recent example of a woman found dead in a stairwell at San Francisco General Hospital after being missing for weeks.

“They’re so understaffed at some point every single day they have to divert ambulances to other hospitals because they don’t have staffing at the ER,” SEIU spokesman Carlos Rivera said today.

SEIU Local 1021 is currently in contract negotiations with the city, as are all other city unions except for its police and firefighters, San Francisco human resources policy chief Susan Gard said.

A proposed contract is due before the Board of Supervisors on May 15 and the unions’ current contract expires at the end of June.
The purple-shirted SEIU protesters marched to Twitter headquarters at 1355 Market St. after today’s rally, blocking streets along Market Street during this evening’s commute yelling, “Pay your taxes!”

Supervisor David Campos appeared with the union in front of the Twitter building to present the social networking company with a bill for $56 million in taxes that the union claims the company would have paid if it were not for the city’s tax incentive program.

That figure includes revenue that would have come in had Twitter employees paid taxes on income from Twitter’s recent initial public offering, according to the union.

The union claims that the tax breaks have cost the city more than $100 million, but the mayor’s office said in a statement that new businesses moving into the area have generated $8.4 million in new revenue.

The mayor’s office did not specify if it accounted for lost revenue from the payroll taxes in that figure. When the tax breaks were originally implemented, the city controller’s office estimated that they would generate the city a net gain of $54 million in additional revenue over 20 years.

The controller’s office is expected to issue a three-year assessment of the tax breaks later this spring.

The issue of tax breaks for payroll taxes may soon be moot, however. Due to a ballot measure passed in 2012, the city is in the process of restructuring its business taxes and starting this year is phasing out payroll taxes in favor of a gross receipts tax.