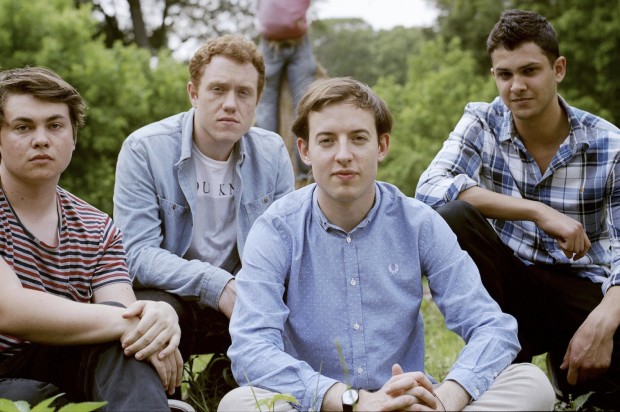 It’s the time of the year where you can get your Coachella fix without heading all the way to the blistering heat (or sand-streaked winds) of the Empire Polo Fields. One such offering from the festival that’s headed to the Bay Area is UK band Bombay Bicycle Club, who welcome the opportunity to play a smaller venue.

“We enjoy a more intimate show. Playing outside on a big stage at a festival is an amazing experience though,” guitarist Jamie MacColl tells the Appeal. He’s sitting in the bathroom of the band’s tour bus as they head to San Diego for a show in between Coachella weekends, which in its own strange way, lends a very intimate appeal to our interview.

“I’m not doing anything in there,” MacColl jokes. “It’s just a lot quieter in here.”

The band’s current show set-up, all in the name of new record So Long, See You Tomorrow, is surprisingly expansive. Visuals coalesce from their kaleidoscopic album cover, its looping nature a direct reflection of Bombay Bicycle Club’s music. Though they’ve pared down a bit since starting their tour in the states, the sweeping songs from So Long, See You Tomorrow more than make up for a slightly subdued visual product.

“We wanted something bold and colorful that represents the sound, which is colorful and tropical but at the same time repetitive. There’s a general theme,” MacColl explains. “It’s about the idea that things change yet always stay the same, and that’s why you have that circular image. It’s the circle of life.”

The still rather young band has been on the scene since its members were 15 years old and simply enjoying the fares of the Bombay Bicycle Club. Their name actually comes from an Indian chain restaurant, one whose location happened to be near band members’ school at the time. One can only hope it’s gotten them free meals.

Unbeknownst to the lads as they were starting out, India has played a pivotal role in their current creative direction. Their sound may come in fractals, but it is a trip to India in which they were their most open that truly changed the way the band composes music.

“The thing with India is we weren’t really going there with the intent of taking the music forward. Our main reason was to get out of the routine of being on tour and in between album rotations,” MacColl says. “In India, there’s this constant hustle and bustle that makes you want to work. The happy coincidence is that everywhere you turn, you’re surrounded by music.”

MacColl and co. are excited to be amongst yet another musically inclined city. They’ll be playing SF this Sunday, April 20th at the Fillmore. For MacColl, the city has always offered a bit of warmth in a country so incredibly different from his home.

“This time last year I spent a week in SF on holiday. It feels like the most European city in North America,” MacColl says.