City Leaders Hit The Pavement For Walk To Work Day 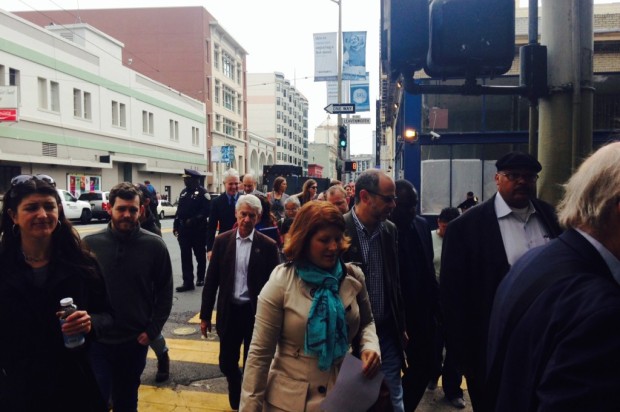 Many San Francisco city leaders, public safety officials and community members took to the streets this morning for the second annual Walk to Work Day.

At one of the hubs scattered throughout the city for pedestrians to gather and prepare for their walks, police Chief Greg Suhr, District Attorney George Gascon, San Francisco Municipal Transportation Agency director of transportation Ed Reiskin and other MTA board members, along with Tenderloin neighborhood residents and other community activists headed on a tour of the Tenderloin that ended at City Hall.

Walk SF executive director Nicole Schneider led a morning walk with stops at key intersections in the Tenderloin to highlight project improvements in the area and elsewhere in the city.

One stop was at the corner of Golden Gate Avenue and Jones Street where pedestrians can cross in any direction on a green light in what she called a “pedestrian scramble.”

She said the practice makes it safer when cars turn, which is often when accidents occur.

In 2013, there were 21 fatal pedestrian accidents and four bicycle deaths in San Francisco. So far this year there have been seven pedestrian fatalities.

Once the group arrived at City Hall, Schneider spoke about the city’s commitment to “Vision Zero,” a goal to eliminate all traffic deaths by 2024.

“We have the fabric of a walkable community,” she said.

However, she continued, “We have streets designed for speed, not safety.”

She called Vision Zero an ambitious goal, but possible.

“Our transportation system is going to take a lot of work to change,” Schneider said.

Reiskin laid out plans for the MTA to reach the 10-year goal with the unveiling of 24 projects to be completed in the next 24 months.

The engineering projects are intended to improve safety for walkers, bicyclists, motorists and those on public transportation.

Some of the projects include sidewalk improvements, changes to bicycle lanes, lowering speed limits on certain streets and other safety measures.

“People should not be dying in our streets while trying to get around,” Reiskin said.

He called for a unified front at City Hall to tackle pedestrian safety issues.

“We need everyone in the city to join this effort,” he said.

He challenged residents to not look at their cellphones while walking, driving and biking, and to add more walking into their commutes and other trips usually taken in a car.

According to Walk SF, 60 percent of major traffic accidents occur on only 6 percent of city streets, many in high-density areas such as the South of Market and Tenderloin neighborhoods.

Supervisor Jane Kim, whose districts includes those areas, said, “We all know pedestrian safety is a citywide issue.”

She rallied community members and city department heads this morning and said, “We can be leaders to make this the safest city to walk and bike in.”

She called for traffic re-engineering plans and increased enforcement.

She said for residents, walking is a healthy choice and helps reduce congestion on the streets.

Supervisors John Avalos and Eric Mar walked some of the farthest distances this morning to get to their City Hall offices.

Avalos clocked in nearly 5 miles, starting in his district’s Excelsior District, while Mar headed into Civic Center from the Richmond District.

More information about Walk to Work Day is available at walksf.org/events/walk2work.