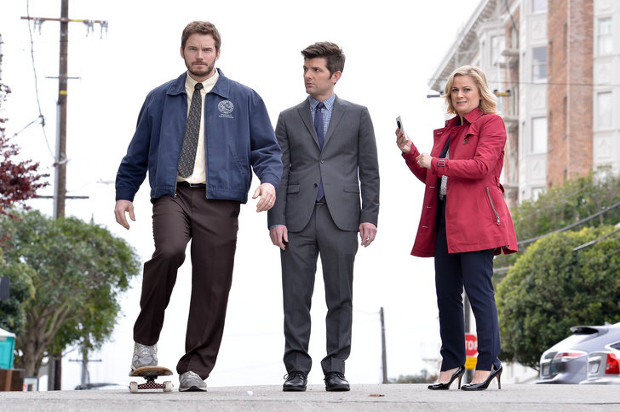 Monday, April 21, 2014 was the day we all survived the onslaught of jokes about Jesus’ resurrection, getting stoned, and Hitler’s birthday. We as a nation now deserve to treat ourselves to discounted candy at our local Walgreens to let the healing process begin.

Monday, April 21
Rewrapped (8pm, Food Network, series premiere)
When I first saw the listing for Rewrapped, I was fully expecting to shoot finger guns in the direction of the Food Network’s corporate headquarters for their clever reboot title. You may remember Unwrapped, the show hosted by Marc Summer which featured snack foods being extruded out from factories? It was simultaneously enthralling and existential crisis inducing (HOW IS ANY OF THIS SUSTAINABLE?) to me. But Rewrapped is just another Food Network competition show (extruded from Food Network’s brain trust like so much flash frozen ravioli), this one hosted by former N’Sync-er Joey Fatone along with Marc Summers, a total bait and switch! It legitimately bummed me out.

Archer (10pm, FX, season finale)
Between calling itself Archer Vice, a country music album release, and a character pregnancy, this season found the staff of ISIS trading spycraft to become a bumbling cocaine cartel, which series creator Adam Reed said he did out of boredom. Reed has mentioned in interviews that at the end of this season, the series will ‘unreboot’ and return to its spy series/office politics roots next season.

The Boondocks (10:30pm, Adult Swim, season premiere)
2010 was the last time The Boondocks was on the air. And this is totally by design (the last time before that was 2007). This will be the fourth and final season of the incendiary and hilarious cartoon based on the comic strip by Aaron McGruder.

Tuesday, April 23
Deadliest Catch (9pm, Discovery Channel, season premiere)
Hey, nobody is going to want to watch you at your job for ten seasons at the number crunching plant or whatever, but congrats if you’ve been at the same job for ten seasons worth of television, I guess? That’s some job security. It’s been ten seasons worth of people making low-hanging fruit jokes about coming home from their office jobs to watch people do their jobs crabbing in the Bering Sea.

Faking It (10:30pm, MTV, series premiere)
Following the heels of Awkward., MTV tries “to hit a double” in the high school sitcom realm with Faking It, which focuses on two best friends who end up posing as a lesbian couple in order to be popular at their high school. Air quotes indicate the intersection of sports/sexuality puns I got for you (which I honestly thought would be more of).

Wednesday, April 24
Dual Survival (9pm, Discovery, season premiere)
It’s no Naked and Afraid, but honestly what is? There would be no television criticism is we held everything against what Naked and Afraid has done for our television landscape.

Thursday, April 25
Parks and Recreation (8pm, NBC, season finale)
Parks and Recreation, while maybe starting to run out of stories to throw its characters in, is still one of the funniest and most consistent shows on television. On this one-hour season finale, we’ll be getting guest star after guest star as this season’s Unity Concert story arc concludes with performances by Jeff Tweedy of Wilco, The Decemberists, Letters to Cleo, Yo La Tengo, and Ginuwine. And boy, do I feel like I just wrote the line-up for an awards show.

Bad Teacher (9:30pm, CBS, series premiere)
Bad Teacher is CBS’s limited series adaptation of the 2011 film of the same name, starring Ari Graynor as the titular Bad Teacher (Camerson Diaz in the theatrical interpretation). While CBS’s Bad Teacher shares the same name, it will not be a straight-up retelling of the original source material, but expects to use the name as a jumping-off point for exploring the themes explored in the film…oh who am I kidding. It’s a sitcom that is retreading what the film already treaded. But hey, it is worth noting that the Bad Teacher television adaptation was created by Happy Endings writer Hilary Winston and also stars David Allen Grier and has Veronica Mars and Party Down alum Ryan Hansen in it.

Black Box (10pm, ABC, series premiere)
Firmly planted in the ‘professionals who are great at their jobs, but have lousy personal lives/dark secret genre’, Black Box reminds me of last year’s unfortunate Do No Harm. Famed neurosurgeon Catherine Black is a House for the dome piece, but secretly suffers from bipolar disorder. Which looks like it manifests itself in United States of Tara-esqe moments, which was dissociative disorder, and not bi-polar. As someone who does suffer from that mental (ch)illness, it’s cool to see mental health discussed on television (see also: ABC’s Mind Games), but it does feel like it is exploring it the issue in a super exotic and taboo way, which is kind of backwards (picture me shrugging)? I mean, you can say the same for something like Pervasive Developmental Disorders in murder police shows, see FX’s The Bridge, and this season’s episode of Community, “Basic Intergluteal Numismatics” where Abed lampshades the trope that the autistic people make the best homicide cops. There are stories to be told about mental illness, but maybe not so much in the antiquated, hush-hush ‘I’m trying to keep it a secret from those around me while automatically solving insolvable homicides’ arena. But hey, that’s me, who’s okay and who has cycling bipolar type 2, and is more than okay to talk about it openly. On a positive, San Francisco stand-up comic Ali Wong is in the series, so yay!

Review with Forrest MacNeil (10pm, Comedy Central, season finale)
Review with Forrest MacNeil is about hapless, milquetoast life reviewer Forrest MacNeil, who reviews life experiences (played by Andy Daly in the show Andy Daly so rightfully deserves), and yes it is hilarious. Through its first season, Review secretly transcended its premise, and what we got was the story of a man who is ruining his life right before our very eyes with each episode. And it is dark. And beautiful to watch unfold!

Friday, April 26
Last Man Standing (8pm, ABC, season finale)
Leave it to Tim Allen to keep beating the drum that men still need to be men in the face of increased feminization. Why, he’s a Rosa Parks of misandry, and this show is the bus that Tim Allen refuses to leave his seat for.

Saturday, April 27
My Cat From Hell (8pm, Animal Planet, season premiere)
I imagine this genre of bad pet shows are true crime/I survived in a Turkish prison/life inside jail shows for the shut-in pet set of society. Which is totally valid.

Sunday, April 28
Last Week Tonight With John Oliver (11pm, HBO, series premiere)
After John Oliver’s wonderful turn as host of the Daily Show last summer, bully to HBO for getting him to host his own news parody program on the premium channel.