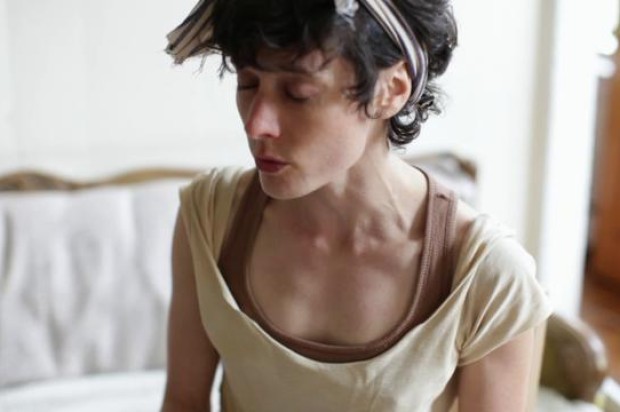 There’s little barrier between a singer-songwriter and their audience, it seems. Sure, you may hear a guitar for musical impact or rather ambiguous lyrics for depth, but the appeal of an artist going it damn near alone is just how intimate your connection can be to their music. For intuitive folk musician Diane Cluck, that level of intimacy is inherent to her message.

Cluck approaches the medium with a storyteller’s eye and an earnestness that tinges her vibrato-laden vocals with a dizzying level of emotion. It’s to the point where fans describe her shows as almost a religious experience, a compliment Cluck takes very seriously, moving her performances from emotionally active to interactive.

“I’m starting to incorporate group singing into my shows because I want for others to experience, on a somatic level, how powerfully connected we are. Tone and melody are outside the realm of regulated information so there’s a lot we can freely explore and discover there,” Cluck tells the Appeal. “In the studio I try to remain open, curious, and forgiving, to create a version of a song that represents it well enough. It’s not much different from performing live.”

When it comes to studio work, the forthcoming Boneset is Cluck’s first proper release. The album has marked a series of firsts for Cluck, who directed her first music video for the song “Sara.” First single “Why Feel Alone” starts off surprisingly casual, almost conversational. Jangles of guitar and a grab bag of percussion embellish what needs little to propel itself: Cluck’s vibrant vocals.

On the way she approaches songs like “Why Feel Alone,” Cluck sees them as neither conversation nor journal entry but something far deeper. “Perhaps more of a potential catalyst,” she says, “relating information I feel inspired to share with others. I often write in story-teller mode, trying to extend bridges between my personal experience and what might be more universal.”

Cluck will be returning to SF after almost two years away tonight, where she’ll be playing the Chapel. Much like the way she straddles the personal and universal, her last shows in the city were spent playing a larger show and a rather unique house show “hosted by a fellow as a gift for his girlfriend.”

“I played in their living room for them and a few friends and talked about what I do,” Cluck explains. “It felt like teaching a liberal arts college course, which I haven’t actually done. Enjoyed.”