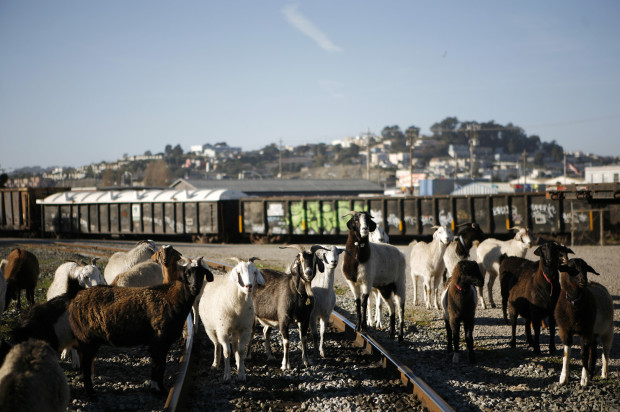 A herd of goats responsible for some of San Francisco’s trickiest landscaping jobs will be available for the public to meet at an open house in the city’s Hunters Point neighborhood this weekend.

Nearly 100 goats, including 49 babies, will be at City Grazing’s field at 100 Cargo Way from noon to 4 p.m. Sunday, said the company’s goat herder, Genevieve Church.

City Grazing contracts with public agencies and private residents for use of the goats, which chew up overgrown vegetation in steep areas often inaccessible to humans or machines, such as at the Presidio’s historic gates, Church said.

She said the goats are a more environmentally friendly way to clear brush, invasive blackberry bushes or weeds from properties.

“There’s no fumes, nobody with a machine on their back,” Church said.

She said the goats leave behind biodegradable fertilizer that immediately begins putting nutrients back into the soil and they do not require the disposal of clippings or other green waste.

The company recently decided to increase the herd by allowing the goats to breed and are allowing members of the public to meet and pet the new animals on Sunday.

After the open house, the goats will be allowed to graze at their normal spot in a field adjacent to railroad tracks between Pier 96 and Third Street.

More information about the goats can be found online at http://citygrazing.com.