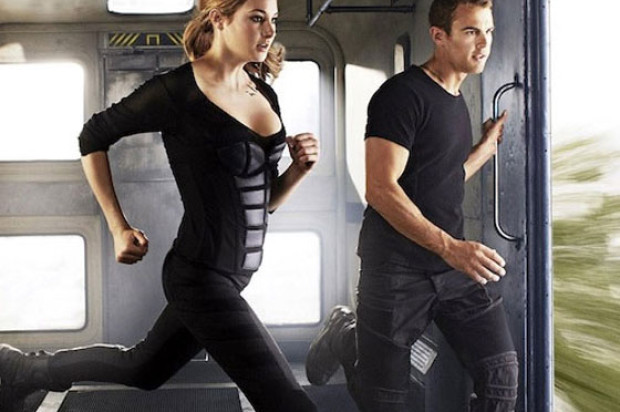 I understand the draw of teen lit. They’re page turners that appeal to the heightened, hormone-fueled emotions of your younger years. The world sucks, you’re different–special!–and one day everyone will see that! Teens might not live in a post-apocalyptic hell hole, but I’m sure high school feels like it sometimes.

Divergent is the latest female-lead, post-apocalyptic action series, and yes, it’s a lot like The Hunger Games. But that’s not necessarily a bad thing.

Set in Chicago, in an unspecific future, but at least 100 years after a war has left the world in ruins, this version of the windy city is surrounded by a large electric fence, to protect it from…well, perhaps we’ll find that out in the sequels.

Society has been divided into five “factions.” Of course, these factions bear some resemblance to current professions, or at least they did to me. You’ve got the “honest” Candor (lawyers); the “intelligent” Erudite (scientists); the “peaceful” Amity (hippies); the “brave” Dauntless (military); and the “selfless” Abnegation (non-profits). Not sure where those who write dystopian books and movies would fit in. Perhaps they’re part of the “Factionless” (homeless)?

Our heroine, Beatrice (Shailene Woodley), was born into Abnegation, the faction that, because they are selfless, does most of the governing. Her father is high up in the political ranks, (which makes sense, since he’s played by Tony “I’m the PRESIDENT!” Goldwyn), but Beatrice is drawn to the black-leather-clad, running-through-the-streets, climbing-buildings-while-shrieking assholes that are Dauntless.

This societal division is designed to keep order and peace. People are born into their factions, but when they reach their teen years they take a personality test that reveals if they are made for the faction they were born into, or destined for another. Post test, they can go with the faction they were destined for…or choose the one they want to belong to, the catch being, once they choose, they can never go back.

But Beatrice’s test results are inconclusive. They reveal she is more than one faction; she is “divergent.” And this is a bad thing. She is told to keep this a secret, or risk losing her life.

Does Beatrice choose to stay in boring, gray Abnegation? Well, she’s wearing black leather on the poster; it’s not a spoiler to say she joins the cool kids. And she goes by “Tris” now, thanks.

The middle section of this admittedly overlong movie is a series of training rituals: hand-to-hand combat, target practice, knife-throwing, psychedelic drug tests that reveal your deepest fears. Friendships are forged, (Zoe Kravitz does a nice job as Tris’s gal pal, Christina), and enemies made. (Though why they chose to cast three men who look EXACTLY alike as Tris’s friends and foe remains a baffler.)

But what would a dystopian teen adventure be without a love interest? Not the new Hunger Games, that’s for sure! And thankfully, we’ve got a better guy to look at than that milquetoast Peta (isn’t he the worst?!). Our heroine’s eye candy is a Dauntless trainer who goes by “Four,” and he’s played by Theo James, who “Downton Abbey” fans may recognize as the Turkish guest Mary kills with her vagina.

The movie follows a formula, and there aren’t a lot of surprises. But I have to say, I liked it more than the first Hunger Games. The set-up is just slightly less ridiculous, the camera work less “cameraman with palsy,” and the corrupt government conspiracy is a little more believable. Plus, that evil Faction is headed by another woman, played by Kate Winslet, (doing her usual terrible American accent).

It’s going to take more than The Hunger Games and Divergent to erase the horrors of Twilight and its nightmarish messages about sticking with abusive assholes who can’t control their rage. But I’m glad we’re moving along, and Hollywood is giving teens some kick-ass heroines–saving dudes in distress!–to emulate.