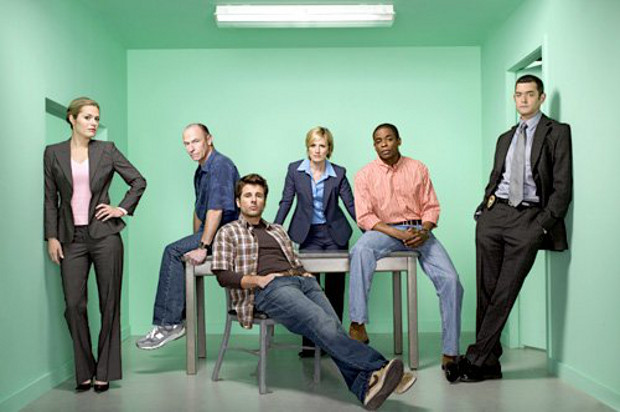 It’s cute of productivity experts to always smugly bemoan the billions (upon billions) of dollars of lost productivity that March Madness reportedly wreaks on the workplace. Cute in the eye-rolling, smug, hey-there’s-some-irony-in-complaining-about-losing-money-when-no-single-student-athelete-in-the-NCAA-tournament-is-making-a-single-cent-off-this-either. So hell, while I was more about the Mall Madness anyway, during March Madness, steal a bunch of office supplies (don’t say SF Appeal told you to) or something as you bemoan how your bracket got busted.

Monday, March 24
Teen Wolf (10pm, MTV, season finale)
Teen Wolf proves that you can create shows based on existing properties that have nothing to do with the source material (besides a name commonality), and still come up with compelling television. This can also be extended to other properties from the 80’s, for example:

Short Circuit: Techno-thriller (yes I’m taking the term back I realize this isn’t the early 90’s) about the birth of artificial intelligence and the rise of transhumanism.
Problem Child: Some asshole foster kid with clairvoyant powers who is hunted down by the government.
PCU (or Back to School for that matter): A scathing indictment of the educational system/sex romp.

Tuesday, March 25
Friday Night Tykes (9pm, Esquire Network, season finale)
Esquire Network’s buzz show about children who get pushed hard while playing football and suffering brain injuries in Texas has established a foothold in “hey why don’t you watch the show and come to your own conclusion” television that Esquire Network has gleefully used in its promotion of the show. Well played, Esquire Network. Well played.

Brooklyn Nine-Nine (9:30pm, FOX, season finale)
Months into its premiere and the freshman comedy from Parks and Recreations writers Mike Schur and Dan Goor scored not one, but two Golden Globes for best comedy and actor (Andy Samberg). Out of the gate, the show already demonstrated a strong point of view, and killer ensemble that only grew stronger as time went on. Brooklyn Nine-Nine Will thankfully be returning for a second season, so we can save our internet outrage pitchforks for something else (like renewing Enlisted for a second season).

Note: While we’re on the subject, AV Club’s piece on why the nice guy shtick isn’t funny (focusing on Joe Lo Truglio’s Detective Boyle) anymore by Genevieve Valentine is on that real tip.

Wild Things with Dominic Monaghan (10pm, BBC America, season premiere)
While not a retrospective of the 1998 film that featured Neve Campbell and Denise Richards making out, the show features former Lostie Dominic Monaghan (MORE LIKE SUCK SHAFT) getting into the wild and getting up close and personal with the wild beasts of the wild, for our amusement and pleasure.

Wednesday, March 26
Psych (9pm, USA, series finale)
After nearly eight years on the air (and claiming the mantle of longest running show on USA away from Monk, which ran for seven years), USA has canceled the light hearted, breezy, and more often than not good for a few laughs per episode (which is basically USA’s wheelhouse) pop-culture reference packed comedy. Pscyh will live on in our Netflix queues and possible television movie, because old shows never die, they just get revisted or rebooted.

Broad City (10:30pm, Comedy Central, season finale)
Broad City existed as a web series for four years before getting picked up for television and produced by Amy Pohler. That time in the internet trenches reflects in spades, as the jump into television was incredibly natural and uproarious for series creators and stars Ilana Glazer and Abbi Jacobson as the twentysomething female slacker stoner heroes living in New York we deserve.

Thursday, March 27
Surviving Jack (9:30pm, FOX, series premiere)
Christopher Meloni stars in this midseason sitcom from Justin Halpern (the Shit my Dad Says guy) based on his autobiography “I Suck At Girls” and executive produced by Bill Lawrence (Scrubs, Cougar Town). Meloni is a tough, no-nonsense father who imposes his military style of discipline on his son.

Friday, March 28
Enlisted (9pm, FOX)
I am not positive if this week’s episode of Enlisted is the season finale (according to Wikipedia, this week’s episode is the last episode with an assigned air date, though three more episodes have been shot), so I’m going to say it’s not. But I’m using that as a symbolic gesture in hopes that this isn’t the end for the show that earns every single letter of praise heaped on it, a show that is actually both hilarious and heartfelt. Watching each episode of the military workplace comedy feels like being let in on a secret, that greatness is happening right in front of our eyes, While if it’s still not known if it will be returning for a second season, I know I will be savoring every frame of this week’s episode. And you should too. And tell a friend!

Note: Enlisted creator Kevin Biegiel’s piece in The Hollywood Reporter from a couple of weeks ago about his heart attack at 32 and PTS is tremendous.

UPDATE: According to Enlisted creator Kevin Biegiel via Twitter, this week’s episode is NOT the season finale and there are five episodes left! You hear that, everybody?

@paolo @sfappeal wow, thank you! Also not finale this week – just a crazy one. There are 5 left!

Saturday, March 29
Hannibal Buress Live from Chicago (11:59pm, Comedy Central)
Between his recurring role on Broad City and shooting a pilot for Comedy Central, Hannibal Buress is on the verge of having a hell of a breakout year. His new (and uncensored special) airs tonights.

The Walking Dead (9pm, AMC, season finale)
The second half of The Walking Dead’s fourth season felt like the Tailies episodes of LOST, which isn’t the worst thing in the world. It did give the stories and characters more room to breathe, and let the audience know it wasn’t beholden to having Rick Grimes as its central character (my problem with earlier seasons of the show). Don’t get me wrong, this batch has still resulted in more than a couple of THIS FUCKING SHOW I SWEAR TO CHRIST (as is The Walking Dead way) and I have felt issues of pacing issues during these episodes, in that any sort of meaningful plot development gets dumped because the season ran out of runway. That said, The Walking Dead is a show that is not in the hatewatch/DVR purgatory category.