Appealing TV: How I Met Your Mother, Silicon Valley, and Game Of Thrones

Continuum Cougar Town Game of Thrones How I Met Your Mother Inside Amy Schumer Million Dollar Listing: New York Once Upon A Time In Wonderland Prepper Hillbillies Silicon Valley The Red Road Turn Veep by Paolo Sambrano | March 31, 2014 9:07 am | in Culture | 0 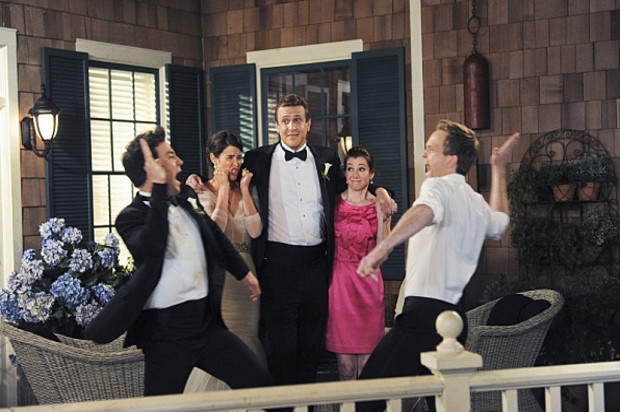 We are coming up on the tail end of this television season! Much like spring, it brings with it a promise for renewals and returns.

Monday, March 31
How I Met Your Mother (8pm, CBS, series finale)
Nine years later, it’s clear that Future Ted Mosby really ought to learn how to tell a better story. Something a bit more succinct, with a clearer end in mind. But that’s neither here or there. The sitcom with a mythos finally comes to an end, as fan theories (some morbid) have been circulating for weeks now.

Tuesday, April 1
Cougar Town (10pm, TBS, season finale)
The little cult show (with the unfortunate name) that could found its way from ABC to TBS, and with it, copious product placement from Target. But still, its the best sitcom about white people drinking wine in suburban Florida out there today.

Inside Amy Schumer (10:30pm, Comedy Central, season premiere)
The raunchy sketch comedy show, starring the titular (huh-huh, tit) comedian Amy Schumer, returns for another season of sex (and awkward) stuff. And it is going to be glorious! Keep on with the HBO “Real Sex” styled person on the street interviews and I’ll be so happy.

Thursday, April 3
Once Upon a Time in Wonderland (8pm, ABC, series finale)
I had no idea this was still on the air, and that’s not even snark. But it doesn’t actually matter, because word came last week that ABC will not be renewing the spinoff of the show I only understood the plot of a couple of weeks ago. If this frees Naveen Andrews from his tragic Jafar get-up, the world is a little better for it.

The Red Road (9pm, Sundance, season finale)
SundanceTV’s first scripted entry of the year didn’t quite replicate the big dick prestige swinging momentum of last year’s surprises Rectify or Top of the Lake. The drama focusing on the relationship between members of a Native American tribe and their non-native members wasn’t quite the post Game of Thrones shine for Jason Momoa. But it did have Tom Sizemore in a non sex tape role. For more information on Jason Momoa, check out Fox’s North Shore.

Friday, April 4
Continuum (10pm, SyFy, season premiere)
The Canadian time-travel cop show returns for a third season of temporal paradoxes, timeline screwiness, lightly serialized science fiction, and Vancouver, Vancouver, Vancouver. It promises to be a better experience than the one time I drunkenly debated a psychic about free will vs determinism at an Oktoberfest in Oakland.

Saturday, April 5
Prepper Hillbillies (10pm, Destination America, series premiere)
In a title that must have been created by throwing darts at a programming line-up, this show on the cable badlands of Destination America follows a team of home security experts in Georgia, which feels like a bait-and-switch, to be honest.

Sunday, April 6
Game of Thrones (9pm, HBO, season premiere)
All men must die! The phenomenon that launched half a dozen basic cable shows with “Game of” in their title returns for a fourth season of dragon mama drama, bare breasts, and smug people explaining how the book did it differently.

Turn (9pm, AMC, series premiere)
Turn is just fine, thank you, AMC. I won’t be adding in that whole “The untold story of America’s first spy ring” you’ve been trying to shoehorn during its promos. Set in 1776, Turn focuses on the first spies for General Washington amidst the fledging United States of America and the Revolutionary War. One may say that it is “The Americans” before the Americans! Ha-cha-cha! High school American history teachers stand-up! And of course, it was based on a true story. The rise of spy/espionage shows on television means a marked uptick in use of the word ‘intrigue.’

Silicon Valley (10pm, HBO, series premiere)
Given our proximity to the the show’s namesake, I was lightweight surprised there hasn’t been much more of a stink raised regarding Silicon Valley’s Bay Area billboards featuring the show’s cast (Thomas Middleditch, T. J. Miller, Zach Woods, Kumail Nanjiani, and Martin Starr) spoofing our Lord and Savior’s Steve Jobs’ iconic turtleneck and finger pose. Silicon Valley was inspired in part by Mike Judge’s own experience working as an engineer in the Silicon Valley in the late 80’s. Which is something I did not know about the man who created my beloved Beavis and Butthead.

Veep (10:30pm, HBO, season premiere)
Back-to-back Emmy winner Julia Louis-Dreyfus as Vice President Selina Meyer and her hapless staff returns for a third season of profanity-packed political satire. If it’s good for creator Armando Iannucci (of other previous profanity packed political satires, The Thick of It and In the Loop) it is certainly more than good for us.