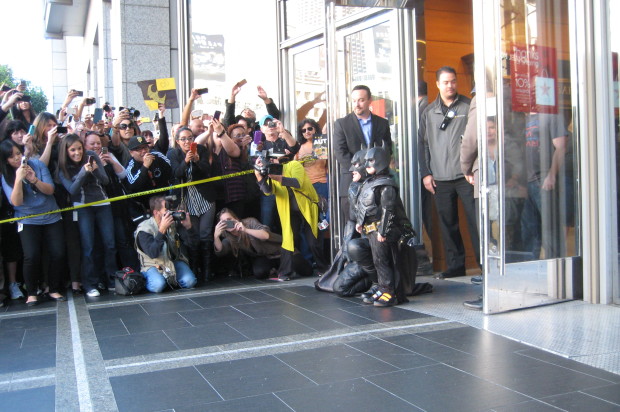 San Francisco first responders, including firefighters who responded to last July’s Asiana Airlines plane crash and a police officer who helped organize the “Batkid” celebration, were honored at a ceremony held by the city’s Rotary Club today.

The Rotary Club of San Francisco held its annual awards to honor an outstanding member from each of San Francisco’s police, fire and sheriff’s department, as well as the U.S. Coast Guard.

Among the honorees this year were fire rescue Captains Tony Molloy and Stuart Beach, who responded to the crash of Asiana Airlines Flight 214 at San Francisco International Airport on July 6.

“That was an extraordinary day, but this is for the totality of their careers,” Hayes-White said.

Beach recalled responding to the airport from the city’s Haight-Ashbury neighborhood and encountering a hectic scene on the tarmac. He helped set up a triage area and got dozens of critically injured victims to nearby hospitals.

“There were a lot of people who stepped up that day and did an amazing job in a very challenging situation,” he said. “We train for these things hoping that they never happen, but if they do, you rely on that training.”

Three girls ended up dying following the crash, including one, Ye Meng Yuan, who was apparently run over on the tarmac by San Francisco firefighters responding to the scene.

Beach said he was on the other side of the fuselage and did not see what happened to the girl.

“It was a tragedy that that happened,” he said.

Among the other Rotary Club honorees today was police Officer Raymond Padmore, who helped partner with the Make-A-Wish Foundation and other city officials to hold a series of events in the city for 5-year-old Miles Scott, who fulfilled his wish to become Batman for a day.

The event went viral, bringing out thousands of onlookers around San Francisco and others following on social media as Miles fought villains and was eventually given a key to the city by Mayor Ed Lee and police Chief Greg Suhr.

“It started out as sort of a simple way to help for a worthy cause,” Padmore said. “This one took off far greater than we imagined.”

Padmore is the Police Department’s point person for its various charity events, including a “Tip-A-Cop” fundraiser at Morton’s Steakhouse on Wednesday and a “Polar Plunge” dive into the Bay on Saturday, both to benefit Special Olympics Northern California.

“My strengths lie in reaching out to the public,” he said. “We know it’s more than just going out and enforcing the laws in our community.”

Payne has served for more than 30 years in the sheriff’s department and organizes its toy drive, which delivers toys to thousands of underprivileged children during the holiday season.

The Rotary Club of San Francisco, the second-oldest club of its kind in the world, is an organization of business and community leaders who provide and promote humanitarian service. More information about the group can be found online at www.sfrotary.com.