Owner Of Iconic SF Hamburger Joint Would Rather Close Up Than Sell, Restaurant Site To Become Apartment Buildings 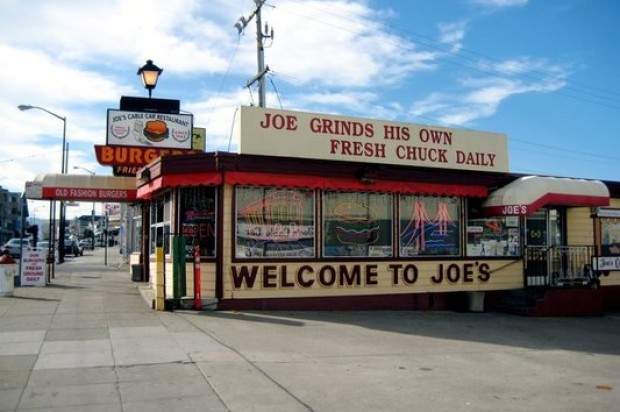 Come March 16, Joe Obegi, the 75-year-old owner and namesake of the diner at 4320 Mission St., will end his run flipping burgers and other eats.

The restaurant opened in 1965 with Obegi on the staff and a few years later he became the owner.

Obegi invited longtime customers to stop by the restaurant on March 17 while employees clean up to pick up any souvenirs that have graced the walls of the old-time diner.

He said many customers’ pictures are posted on the walls, including baby pictures of many residents who now have grandchildren that come to the restaurant.

He said Joe’s has to be off the premises by the end of March so he is giving himself and his staff a few weeks to shut down operations.

He said Joe’s has 15 employees that he is sad to see go.

Obegi said after open-heart surgery a few years ago and other health problems he is not able to continuing running the restaurant.

“I’m going to miss everybody,” he said. “I’m so used to being here and seeing my people.”

Instead of handing it off to new hands, he said he decided, “I want to leave in dignity.”

He said if he gave the restaurant to new owners “they aren’t going to run it the same way.

“I worked so hard and established a good reputation,” Obegi said, noting he has been in the restaurant business since he started working in San Francisco as a young Armenian immigrant.

He has sold the property to new owners that plan to demolish the restaurant and build apartments, Obegi said.

Obegi reminisced about the restaurant’s earlier days, when it was the “size of a cable car” at 160 square feet.

Over the years it has expanded and undergone remodels and is now a 2,000-square-foot space with more parking, he said.

In 2008, Joe’s caught the attention of Food Network chef Guy Fieri and was featured on his show “Diners, Drive-Ins and Dives.”

The Excelsior eatery is hailed as one of the best burger spots in the city and it is known for its patties made from meat ground daily on the premises.

He called the end of Joe’s “sweet and sour.” In the past nearly 50 years, Obegi and his wife haven’t had a chance to take many vacations, he said.

After spending some time resting at his Foster City home, he said he plans to do some traveling if his health permits.

Since announcing the closure at the end of January, Obegi said the restaurant has been busy, with many diners coming in for their last burgers. He said he feels obligated to come into work daily for a chance to “say goodbye to my people.”

He said it continues to make him smile how happy the food and service at Joe’s makes people feel.

“It doesn’t really happen that often that people are that attached to a restaurant,” he said.

For San Francisco native Victor Flores, 21, the end of Joe’s is coming too soon.

The senior journalism major at the University of Oregon in Eugene, Ore., said he won’t be able to come back for a final burger before the kitchen closes for good.

“I just like Joe’s. It’s one of my favorite burger places in the city—though I haven’t been to all of them.”

He said his parents purchased him a T-shirt to remember the place.

“It’s better than nothing,” he said.

Flores has been going to Joe’s since he was little and said “the beef is incredible and the ambiance in the restaurant is very old-school diner feel.”

Jasmin Sirha, 25, grew up in the Excelsior and her parents still live near Joe’s.

She said she has been eating at Joe’s for special occasions for most of her life.

She said growing up on the southeast side of the city Joe’s was “the one cool thing that we had.”

The loss of the iconic burger spot is part of what Sirha called “a transition felt throughout the entire city.”

She said the Excelsior has “a working class feel” and she’s “sad to see that property get gobbled up.”

Whatever housing goes up in the restaurant’s place, Sirha hopes it will be affordable.

Before Joe’s closes, her entire family is planning a final meal out for the juicy burgers, she said.