Appealing TV: The Americans, Portlandia, and The Red Road 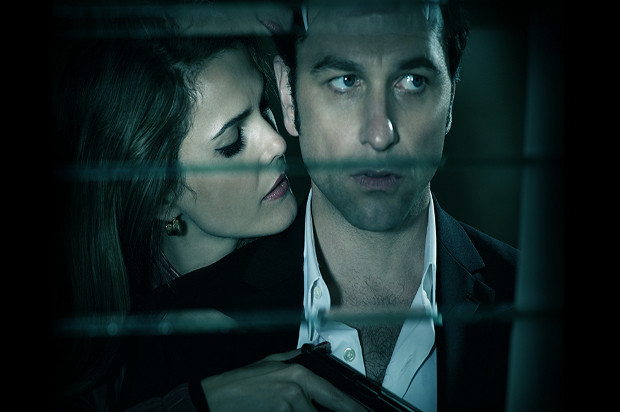 Monday, February 24
Dallas (9pm, TNT, season premiere)
The continuation of the continuation (not reboot) of the saga that started in 1978 resumes with the sexy oil-rich sociopathic Ewings throwing shade and slaps in the name of soapiness, hamminess, horny-ness, and greed. Someone once said that Dallas contains all of the pretension of LA, without any of the things LA actually has.

Also, a million Bison Dollars to the person who can decipher the following trailer for the premiere.

Tuesday, February 25
Glee (8pm, FOX, spring season premiere)
Glee returning with new episodes is kind of a punchline in and of itself, right?

Mind Games (10pm, ABC, series premiere)
Created by Kyle Killen, who brought us beloved and doomed from the start (because television viewers cannot have nice things all the time) Lone Star and Awake, Mind Games has Christian Slater and Steve Zahn as brothers who use behavioral science and con artistry to manipulate people, for good! Also Steve Zahn is bipolar, which adds another wrinkle to the proceedings.

Game of Arms (10pm, AMC, series premiere)
The only way to help reconcile the continuing dissonance that the same network that gave us Mad Men and Breaking Bad is now peddling a reality show about arm wrestlers the name of which is really just a pun of another show on another (premium) network is to think of AMC as the kid that peaked in high school. The kid that everyone thought was gonna do great things, but twenty years later ends up working in accounts receivable and sometimes does paintball on the weekend. You run into ‘voted most likely to succeed HBO’ twenty years later at the grocery store and you lie through your teeth and say you should have lunch and catch up, but you wonder where it all went wrong.

Wednesday, February 26
The Americans (10pm, FX, season premiere)
My favorite show of 2013 returns for a second season of glorious, glorious Soviet wig technology (as Grantland’s Andy Greenwald describes it). Keri Russell and Matthew Rhys are KGB spies posing as a married couple with kids (who don’t know their parents are spies) in 1981 Cold War suburban Virginia. While transcending the already compelling cloak-and-dagger espionage premise, The Americans shines with a through line of relationships being a Cold War of their own (which sounds way less cringe-worthy than it reads – performances by Russell and Rhys sell the hell out of it).

Legit (10pm, FXX, season premiere)
Legit is a show I want to like more than I actually do. Comedian Jim Jeferies’ cringe comedy returns with a second season on television’s new Siberia, FXX. As a pudgy man, I am all for seeing another fellow pudgy man carouse with women out of his league, but beyond that, I didn’t find any of the heart that would have set it apart from all the other shows about straight white men drinking, doing drugs, and screwing.

Ali G: Rezurection (10:30pm, FXX, series premiere)
Everything old is repurposed as new but you get that sinking sensation there is a reason why they kept it hidden in the first place. Ali G: Rezurection isn’t so much a reboot or continuation of the early 2000s comedy that broke Sacha Baron Cohen into mainstream consciousness, as a broadcast of the original run of Da Ali G Show from UK’s Channel 4 in 2000. We’re promised never before seen in the US segments, akin to the lost episodes of Chappelle’s Show.

Thursday, February 27
Portlandia (10pm, IFC, season premiere)
The real triumph in Portlandia is that it’s able to milk so much comedy from a single, laser focused premise and not fall into into pandering, low-hanging histrionic ‘fucking hipsters amirite.’ This comes from strong writing and solid performances from Fred Armisen and Carrie Brownstein.

Vikings (10pm, History, season premiere)
History’s first foray into scripted programming was a solid success, and any show that gives me the opportunity to marvel at Donal Logue is already automatically aces in my book.

The Red Road (10pm, Sundance, series premiere)
After its totally out of nowhere 2013, SundanceTV (formerly Sundance Channel) prepares to swing its big swaggering dick into 2014 prestige with The Red Road, starring Khal Drogo himself, Jason Momoa, along with Martin Henderson, Julianne Nicholson, and Tom Sizemore (remember him?). Ex-con (Momoa) and cop (Henderson) are forced to work together after a tragedy strikes in order to cover up their haunted secrets.

Friday, February 28
Hannibal (10pm, NBC, season premiere)
It is fitting that a show this much about death gets placed in the Friday Night Death Slot. The surprise critical darling from NBC returns for a second season about sadness and murder and (in)sanity. Hannibal earns its bleak outlook and grotesque imagery, taking an adult look at the emotional toll dealing with death can take on the human psyche is usually seen only on cable television (which is more than I can say about a certain other network show about death whose name rhymes with “The Swallowing”).