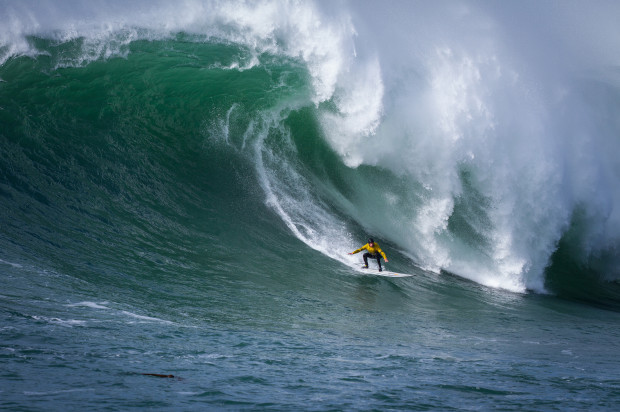 The Body Glove Mavericks Invitational surf competition near Half Moon Bay concluded this afternoon with a South African taking first place and a surfer from Santa Cruz taking third.

Grant Baker previously took first place in the competition in 2006 and reclaimed the title today (photo above), with Hawaiian Shane Dorian coming in second in his first Mavericks contest and Ryan Augenstein of Santa Cruz coming in third.

Fellow Californians Tyler Fox of Aptos, Greg Long of San Clemente and Anthony Tashnick of Santa Cruz rounded out the six surfers who made the finals.

Thousands of people came out to watch the contest today, when weather conditions produced the ideal 30- to 40-foot waves for surfing about a half-mile off the coast of Half Moon Bay at Pillar Point.

“Today is amazing because of how selective we are about the swell,” said Kyla Kemp, 17, of the Half Moon Bay area, who works part-time at the Mavericks surf shop. “We went two years without having it.”

The shop’s owner Jeff Clark organizes the contest, which took place last year but not in 2011 or 2012 because conditions weren’t right.

Winter is usually the best time to hold the competition, between November and the end of March. Experts measure the waves and are able to tell the best conditions for the waves two days ahead of the contest.

Because of safety concerns, spectators were banned from the Mavericks beach and the cliffs above and instead watched the surf contest in a festival set up at a waterfront hotel.

Outside the entrance to the festival, Matt Rollins, 34, of Oakland, was one of the first people to enter.

As someone who surfs at San Francisco’s Ocean Beach and Santa Cruz, Rollins said he likes the Mavericks competition because “it’s big and challenging and pretty crazy.”

“You eat it, you’re going to get washed in,” Rollins said. “The water’s cold, getting held under the cold water is not fun.”

Jameson Kenway, 31, of Moss Beach, who was helping set up equipment for the reggae band Nesta, said he likes the festival because “It’s a celebration of surfing. It’s my day of the year, a coastline holiday. Everyone is just taking it off, they want to join the event.”

Kelly Dallas, 39, a surfer from Calistoga, said that the area of the Mavericks competition has “some of the biggest breaks in the world and it should be a national holiday.”

He said he could have paid $1,000 to go watch it from a boat out in the Bay but decided to spend $15 to watch it at the festival, which included live feeds provided by ESPN shown on jumbo high-definition screens.

Nate Ward, 32, of Gilroy, who said he surfs in the Santa Cruz and Monterey areas, said he likes the festival because of “the big waves that you don’t get that often. Big, tall, large, super-cold water, you have sharks out there and rocks, it’s a rough spot. They’re like the lumberjacks of surfers.”

More information about the contest is available at www.MavericksInvitational.com.