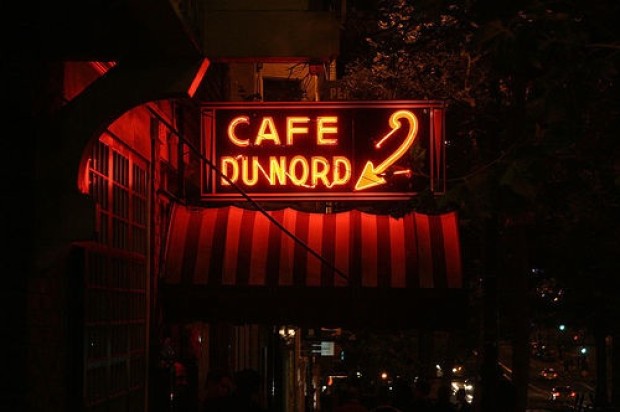 Big changes are coming to the SF music scene, specifically at former Swedish American Society-owned venue Cafe du Nord. As 7×7 notes, the former speakeasy is over a century old, is haunted by ghosts, and has hosted as many legends as it has flashes in the pan. The venue itself is a bit of an anachronism: old guard SF waxing poetic on the edgy. The venue is slated to close for at least six months while the new owners make renovations, and for one of their last shows Cafe du Nord will be hosting a smattering of SF acts including Sea of Bees and Tea Leaf Green’s Trevor Garrod.

Singer-songwriter Goh Nakamura joins the two this Friday night, making for a trifecta of SF talent. The city itself is where Nakamura got his start, playing his first solo shows here and honing his craft at Inner Richmond’s Ireland’s 32. For Nakamura and his fellow musicians, it’s momentous to be eulogizing Cafe du Nord as SFians.

“There’s a narrative involved each time you play a venue that feels like home,” Nakamura tells the Appeal. “Trevor Garrod has a long history with Guy [Carson], who booked one of his band’s first shows and Jules of Sea of Bees said Du Nord was one of the first places she played. I certainly felt that I had reached a new level the first time I played there. There was a sense of prestige because I saw so many good shows there. It certainly made me play better.”

Recalling some of those memorable shows, Nakamura lists off Ron Sexsmith and Joseph Arthur, among others. Just about every audiophile in the city offers a similarly impressive list, it seems. For yours truly, one of the last shows I caught at Cafe du Nord was one that particularly stuck out: a reunited and just as fiery Sebadoh rolling through new material from their first new studio work in almost fifteen years.

For anyone working in and around Cafe du Nord, it was more than a great space for music; it offered a closeness that was hard to come by. Writer Alyssa Pereira, who wrote that aforementioned 7×7 piece, was once a cocktail waitress at the venue and was always struck its warmth. “It really was like a big family. That’s such a cliché thing but they all watch out for each other and that’s really good to see. The two bartenders I worked the most with while I was there, they both had kids and were very brotherly. I’ll miss that aspect of it. Everyone really loves each other over,” Pereira says.

“The one thing people might not know is that the meal the venue served bands during soundcheck was always solid. For like $3-4 you get a balanced and tasty meal,” Nakamura adds. “And for a traveling band, this is heaven. So many times I’d book a show with a traveling band, and hear their sighs of relief as they were eating something with sustenance.”

Those sighs may come once more at a rumored employee party to clear the bar of its wares. Get your fix and toast an iconic venue this Friday. Catch Goh Nakamura, Sea of Bees, and Trevor Garrod at Cafe du Nord on Friday January 3rd. Purchase tickets here.