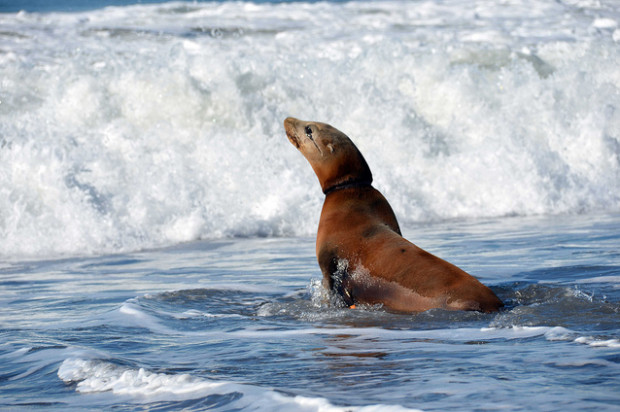 The Aquarium of the Bay is inviting the public to attend the grand opening of the Sea Lion Center at San Francisco’s Pier 39 today and take part in sea lion-related festivities throughout the Martin Luther King Jr. weekend.

The world-famous California sea lions, now an institution and must-see tourist attraction, showed up mysteriously 24 years ago at Pier 39.

A small group of sea lions first appeared in January of 1990, shortly after the Loma Prieta Earthquake and continue to play and sleep down at the end of the docks at Pier 39.

Today, about 650 sea lions can be seen – and smelled – down by the waterfront, a Pier 39 spokeswoman Sue Muzzin said.

Muzzin said the sea lions have been out in full force today due to a surplus of herring in the waters at the Pier.

The newly constructed Sea Lion Center is located on the second level of K Dock. Visitors walk up a staircase from the dock to the center and arrive at an observatory overlooking the sea lions.

Tourists and locals alike are invited to enjoy free, interpretive presentations and tours given by Aquarium of the Bay naturalists.

The Sea Lion Center ribbon cutting, or kelp-cutting as the center calls it, will take place at 10 a.m., Muzzin said.

Educational walking tours will meet at the sea lion statue on the west side of the entrance of the plaza and then continue onto the center where light refreshments will be served.

Naturalist tours will be held through the Martin Luther King Jr. holiday and will depart on the hour from 11 a.m. to 4 p.m.