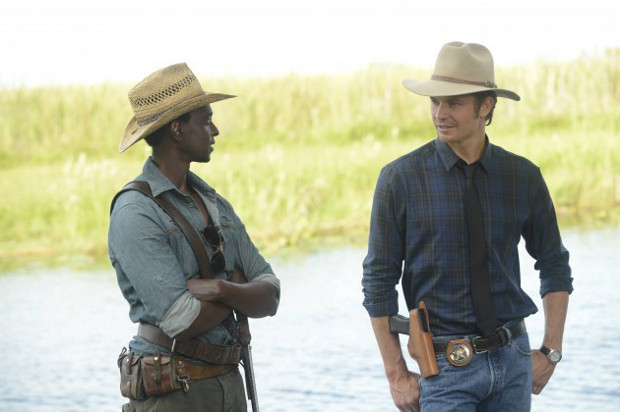 People returning to work who say “back to reality” after a break have never taken psychedelics, obviously. They clearly don’t know that reality is in fact malleable. They usually also talk about leaving money on the table, or insist on ringing a gong whenever a sale is made.

But forget them. Midseason is lumbering around the corner. It’s like September in January!

Monday, January 6
The Bachelor (8pm, ABC, season premiere)
I watched Catching Fire, and couldn’t help but project Katniss and Peeta’s relationship onto Prince Charles and Catherine Middleton’s marriage. And then I felt sad. What if all the winners of the Bachelor tried to overthrow the government?

Tuesday, January 7
Justified (10pm, FX, season premiere)
A couple of shaky post-pilot episodes notwithstanding, the thing that gets me the most about Justified is its consistent quality over its current four season run. We all recommend series and end up picking and choosing which seasons to skip over, but with Justified, after referencing with almost hushed reverence its transcendent second season, everything else is gravy. This season, Michael Rapaport is the big bad, the alligator farming patriarch of the Crowe crime family from Florida. Now let’s get Walton Goggins nominated for something.

Intelligence (9pm, CBS, series premiere)
In his first television role since LOST, and first since 2013’s worst film of the year, Battle of the Year, Josh Holloway plays a secret agent implanted with a computer chip that enables him to project data visualization pornography that enables you to solve things. You know, the kind of rad UI stuff that you’d normally have to be all Beautiful Mind to see. Also starring CSI’s Marg Helgenberger and Once Upon a Time’s Meghan Ory as the Secret Service agent sent to protect him. Start you shipping engines, Tumblr. CBS’s best bet is to have Intelligence join the ranks of Person of Interest and Elementary. Come on, they’re surprisingly good shows from the same network that a majority of AARP members fall asleep to.

Cougar Town (10pm, TBS, season premiere)
White people drinking wine in Florida! Cougar Town is best fictional thing to come out of Florida since Miami Connection. I am outright giddy at its return!

Wednesday, January 8
The Real World (10pm, MTV, season premiere)
I won’t dignify it and all the Ex-plosion season crap. It’s the season of The Real World the people of San Francisco didn’t ask for. Are we all going to hate watch together?

Psych (9pm, USA, season premiere)
If solving murders is really all about touching your forehead and making pop culture observations, I truly got into the wrong racket. Thanks a lot for the inflated expectations, Psych.

Thursday, January 9
The Spoils of Babylon (10pm, IFC)
Leave it to Will Ferrell and Adam McKay to finally bring us a mini-series that makes fun of the mini-series of the 70’s and 80’s. And they brought an all-star cast with them. Including, but not limited to: Tobey Maguire, Kristen Wiig, Tim Robbins, Jessica Alba, Val Kilmer, Haley Joel Osment, Michael Sheen, and the voice of Carey Mulligan.

Friday, January 10
Enlisted (9:30pm, FOX, series premiere)
The hype is strong with this new midseason sitcom, featuring a trio of enlisted brothers stationed at a Florida Army base. We all seem to prefer fictional Florida over real Florida. Keith David is also in it, which is always welcome.

Banshee (10pm, Cinemax, season premiere)
The rad thing about this ‘golden age of television’ or whatever is that the rising sea lifts all boats. Even if those boats largely specialize in churning out low-rent softcore pornography. Banshee fell largely under a lot of people’s radars, but Banshee offers solid, pulpy-drama that is executive produced by Alan Ball (of Six Feet Under, and True Blood fame). And it still contains plenty of skin. This is Cinemax, after all.

Helix (10pm, SyFy, series premiere)
Executive Produced by Ronald D. Moore, the mastermind behind the Battlestar Galactica re-imagining (real question: has enough time has passed to assume that whenever somebody is talking about Battlestar Galactica, they aren’t talking about the 70’s, Lorne Greene, thinly-veiled Mormon allegory and actually means the one with Eddie Jimmy Olmos?). In Helix, a group of scientists from the Center for Disease Control get more than they bargain for when they investigate a possible viral outbreak in an Artic research station.

Saturday, January 11
US Figure Skating Championships (8pm, NBC)
Finally, some sports that are actually on ice (!) ™ and not some lame attempt to crack a joke. This year’s championships are out of Boston, and I suppose will act as an appetizer to february’s Winter Olympics.

Sunday, January 12
The 71st Annual Golden Globe Awards (8pm, NBC)
Step aside people who clog social media with updates about sports, it’s time for the introverted and pop culture sensitive people to shine. Let’s all pretend we write for a snarky pop culture outlet and make fun of celebrities and ‘the industry’ together. Tiny Fey and Amy Poehler host, which is reason enough to watch. Or at least look at the .gifs the following morning.

True Detective (9pm, HBO, series premiere)
True story: a couple of months ago, I happened on the OK Cupid profile of a girl who asked if she should order HBO. I messaged her for the sheer reason that True Detective was premiering in January. Needless to say, the girl never messaged me back. HBO, you’re welcome. Matthew McConaughey and Woody Harrelson star as detectives investigating a serial killer in Louisiana over the course of seventeen years.

Episodes(10pm, Showtime, season premiere)
I had no idea this was still on, seriously.

Girls (10:30pm, HBO, season premiere)
My first SXSW was in 2010, the same year Lena Dunham’s Tiny Furniture debuted. Tiny Furniture went on to win Best Narrative Feature, and got her noticed by Judd Apatow, which reportedly lead to her getting a show on HBO. Three years later, Girls will be premiering its third season, Dunham will be delivering a keynote address at this year’s SXSW, and I still live with my family, where I sleep in a twin sized mattress. She is only three months older than me. WELL.