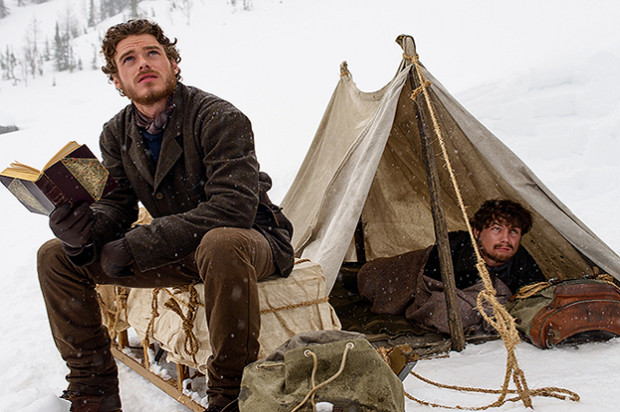 Sleepy Hollow (8pm, FOX, season finale)
Freshman show Sleepy Hollow went from me rolling my eyes at its announcement to unexpectedly becoming one of my favorite shows of 2013. It became more than the sum of its parts, featuring a fun chemistry between the leads, one of the most diverse casts on television, George Washington’s Bible as a plot point, and enough insane moments to become a sort of supernatural Scandal. It leaned into the crazy, and still didn’t break audience trust, which is harder than it sounds. The show returns in the fall, and I cannot wait.

Klondike (8pm, Discovery)
Executive Produced by Ridley Scott, and based on Charlotte Gray’s book Gold Diggers: Striking It Rich in the Klondike, Klondike is Discovery’s first foray into scripted-scripted programming. The mini-series kicks off tonight and ends on Wednesday. This is the account of six strangers when they stop being polite, and start digging for gold. Klondike also features stunt historical casting with Jack London in the mini-series. Finally, kids will know him as more than a Square in Oakland! Which is what I imagine some person who says that “history is alive! history is all around us!” and means it would say. Also, Klondike stars Game of Thrones’ Richard Madden. Proving the adage “first comes love, then comes red marriage, and then comes the historical miniseries”

Tuesday, January 21
Horseplayers(10pm, Esquire)
The new Esquire series Horseplayers features the personal and professional lives of personal trainers of top star of stage and screen, Sarah Jessica Parker. Oh, a Sarah Jessica Parker joke? Go ahead and boo. Go ahead and groan. I can hear you roll your eyes through the monitor. This new offering from Esquire takes a look at lives of horse race handicappers in their quest for riches and the right to be named top horse handicapper.

Given the reins (HAW HAW) to this show, I’d make it about the kids who were obsessed with Sega’s horseracing arcade game, Derby Owners Club over at Milpitas Golfland in the early-aughts.

Broad City (10:30pm, Comedy Central, series premiere)
The television adaptation of the web series of the same name is produced by the goddess Amy Poehler and stars creators (and Upright Citizens Brigade alum Abbi Jacobson and Ilana Glazer) as two twentysomethings in New York. It feels like the perfect panacea to another show about twentysom…screw it. Listen, I’m not even a big fan of Girls, but at this point, the reasons people will find to dump on the show are grasping at straws manufactured out of reclaimed feces. (I was just looking for an an excuse to use the word ‘panacea’.)

The pilot is online which guest stars comedians Fred Armisen and Chris Gethard. The pilot is good, and I am way looking forward to more from Broad City.

Wahlburgers (10:30pm, A&E, series premiere)
Mark Wahlberg asked me to tell your mom he says order the number three. This a reality show about the Wahlberg family restaurant, Walhbugers which is rocking a three-star rating out of 244 reviews on Yelp because of course Marky Mark would open a hamburger restaurant with his family. On the television venn diagram, Walhburgers hits all three points of food + celebrity + reality.

Thursday, January 23
The Fighters (9pm, FOX, series premiere)
I totally get that shooting anything in Boston automatically requires it to contain something, anything by the Dropkick Murphys in it, but why not throw the Mighty Mighty Bosstones a bone, huh? I mean, they have Boston in their name fer chrissakes. The Fighters is produced by UFC President Dana White, and is a reality series on trying to bring boxing back to Boston, which has a good alliteration if anything.

King of the Nerds (10pm, TBS, season premiere)
The surprisingly good first season of King of the Nerds deftly dodged accusations of cashing in on the rise of nerdy culture. Maybe the second season will surprise me again.

Friday, January 24
Mitt (12:01am, Netflix)
I’ve been awful at covering streaming content in the months since I have took on the mantle of Appealing TVer. Netflix is a legitimate player in the television game, one that goes beyond ‘hur hur new Arrested Development on Netflix.’ Netflix’s latest offering is a documentary about Mitt Romney’s (spoiler: losing) presidential campaign.

Black Sails (10pm, Starz, series premiere)
You see, there are pirates. They have sails, and the sails are black. Michael Bay co-created this, so you can assume what to expect already, right there. “Sails just got real.”

The 56th Annual Grammy Awards (8pm, CBS)
It’s music’s biggest night as the music industry pretends it is still relevant, akin to Nero playing his fiddle while Rome burned. Hey, music analogy! Expect a hashtag or two and me trying to figure out the moral quandary of playing Blurred Lines at a wedding reception. Speaking of, Robin Thicke will be playing with Chicago! LL Cool J hosts.