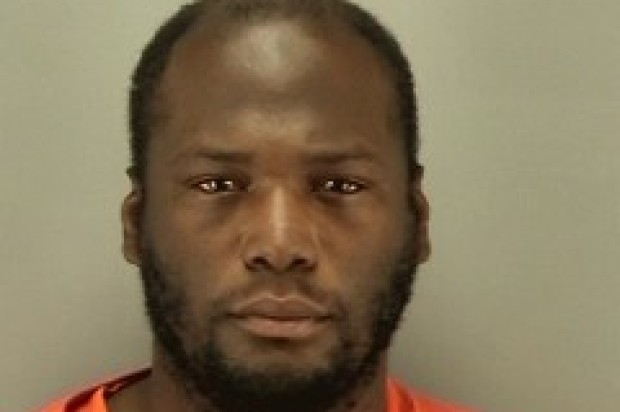 Don’t tinkle on his parade. An alleged repeeing-offender accused of causing $3030.79 in damage to San Francisco Public Library books is now a wanted fugitive, on the run from the law, according to law enforcement officials.

The defendant, Aton Joni Cole—also known as Mike Alabobo— (that’s him pictured above) was charged with one count of vandalism, but whizzed away from his scheduled arraignment on October 31, according to San Francisco District Attorney spokesman Alex Bastian. Cole has not been seen or heard from since, and there is a warrant out for his arrest.

The information flowing from the city officials and law enforcement suggests that the alleged scoundrel urinated on 109 books at San Francisco’s Main Library, across three shelves.

Cole is wanted for a misdemeanor, carrying a possible sentence of a year in county jail, fines, and restitution for the damage caused by the urine.

“We were saddened by the damage, and it did take a number of staff members a fair bit of time to clean up,” said SFPL spokeswoman Michelle Jeffers. “It was dispiriting to have someone disrespect the library in that way.”

Cole was a memorable library patron—clocking in at 6’7’’ and about 300 pounds, according to library staffers.

On October 24 of this year, an employee of the main SFPL library observed the defendant behaving suspiciously—and heard something that sounded like water being poured. Upon investigation, the employee found “urine was freshly dripping” from the damaged library materials, according to court documents. There were no other patrons in the area.

The defendant had been suspended from the main branch for public urination in the past, for allegedly urinating on the carpet near the African American Center on the third floor, according to Jeffers. And that might not be the only incident of this nature.

“For a few months now, we have been finding whole shelves of books on the third floor covered with an unidentified sticky substance,” a library employee told the S.F. Examiner in October. While insufficient evidence exists to turn those suspicions into a criminal case, staffers have theorized that such incidents are the handiwork of a single man-perhaps Cole-who habitually micturates on library property.

At the time of his arrest, Cole had over $4,600 in sequentially marked bills inside his backpack—in 100 and 20 dollar denominations. The SFPD researched the bills’ possible ties to recent criminal activity—such as bank robberies—as well as crimes by suspects matching Cole’s unique physical appearance. SFPD concluded that the money was apparently Cole’s rightful property, and that there was no reason to suspect Cole had obtained the dough unlawfully, SFPD spokesperson Officer Albie Esparza told The Appeal.

Cash in that amount and denomination “could mean an ATM fraud/bank robbery or just a large legitimate withdrawal,” Esparza said. “We always check with our law enforcement partners when we come across these items.”

Though such a large amount of cash raised questions about where it was obtained, federal law enforcement officials (who usually handle crimes like bank robberies or ATM trickery) were unwilling or unable to discuss the case, giving The Appeal a mere trickle of information.

“Our office cannot confirm or deny the existence of any ongoing investigation/cases, including the execution of search warrants,” Lillian Araúz-Haase, a U.S. Attorney spokeswoman told The Appeal.

It’s unclear whether or not the $4,600 was returned to Cole when he was released from county jail prior to his arraignment, Esparza said.

The alleged peeing bandit’s recent exploits come in the midst of the SFPL’s move to address the persistent problems plaguing the public library over the years. But, even recent security investments have done little to curb illegal activities, causing library staffers to fear for their safety, according to the Examiner.

Members of the public with information about the defendant and his whereabouts are encouraged to call the SFPD’s tip line at 415-575-4444 or text-a-tip to TIP411 with SFPD at the start of message.