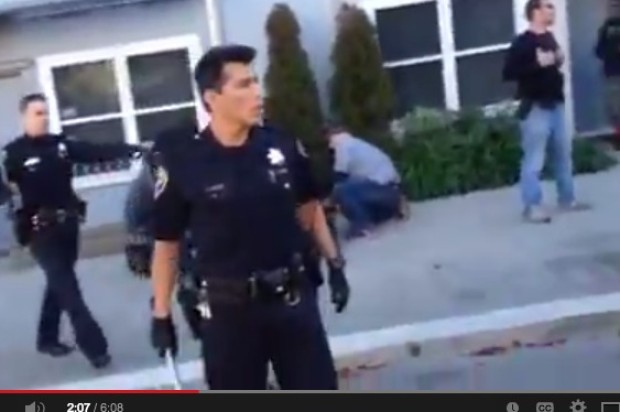 Protesters angry over recent allegations of police brutality in Valencia Gardens gathered outside the Mission police station in San Francisco this evening.

The protesters carried signs with slogans like “Stop Police Brutality” and loudly chanted, “What do we want? Justice. When do we want it? Now.”

The protest was sparked by the arrest of D’Paris Charles Williams, 20, Friday, who was stopped by police after apparently riding his bicycle on the sidewalk at about 3:40 p.m. at the public housing complex near Rosa Parks Lane and Maxwell Court.

The arrest of Williams spurred an altercation between other people at the complex and prompted three more arrests, police said.

Friends and neighbors of Williams, a City College of San Francisco student, said that Williams was brutally beaten by police and that witnesses were attacked as they tried to lend him assistance.

Police said that Williams tried to run from police and was resisting arrest, and that the use of force was justified.

Carla Grisham, 30, a resident of Valencia Gardens, attended today’s protest and, pointing at a banner with pictures of Oscar Grant III and others killed or injured in confrontations with police, said, “Look at all these black men and brown men that got beat up. For what?”

She said she has three children who were outside playing when Williams was arrested, and while she didn’t see the incident she went scrambling to see if they were OK.

“My kids play out there and I know that young man,” she said.

About a dozen police officers standing outside the door to police station kept tonight’s crowd at bay, which spilled into the streets and blocked southbound traffic on Valencia Street. The officers had riot helmets and batons at their side and ready.