Original Bay Bridge Troll To Come Out Of Hiding 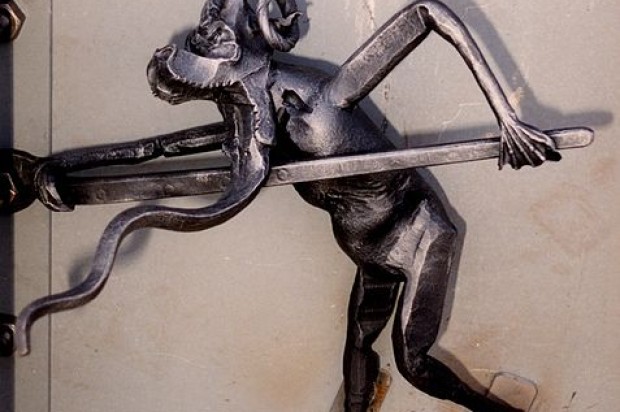 A mysterious figure that has added intrigue and bit of magic to the Bay Bridge for more than two decades will have his time in the spotlight beginning later this week.

The original Bay Bridge Troll will be on display at the Oakland Museum of California from Wednesday through Feb. 26.

The 18-inch steel figure, which has large, curled horns and carries a spud wrench, will be featured as part of an exhibition titled “Above and Below: Stories from our Changing Bay,” which examines how people and nature have shaped the Bay Area together.

The troll had been installed on the Bay Bridge’s old eastern span in 1989 by ironworkers who were repairing damage from the Loma Prieta earthquake. Many considered the troll a good-luck icon, museum officials said.

Museum spokeswoman Kelly Koski said she thinks people are fascinated by the magical, mythical nature of trolls, as well as the mystery of this particular troll.

“For so long it was almost an urban legend, people had kind of heard it was there but people weren’t sure,” she said.

A new troll has been created for the bridge’s new eastern span, and Koski said the original troll is now sometimes referred to as “Troll Sr.”

Now, the question is, where is the new troll?

A Bay Bridge spokesman referred the question to the Metropolitan Transportation Commission.

He said of the new troll, “I saw the guy when he made his debut the night the bridge opened, and he was spirited away and I do not know where he lives.”

Goodwin said he believes the troll is in the process of being permanently placed somewhere on the new span but that he may still have to undergo more preparation, including getting a protective coating.

As for the original troll, the hope is to eventually install it at Gateway Park, a park that is being developed at the new eastern span’s touchdown, he said.