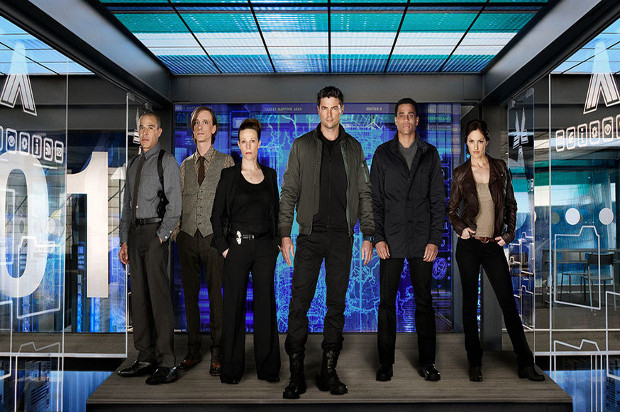 Hey! Remember that Veterans Day is to commemorate those who put on a uniform to serve our country, and not to celebrate those who win Call of Duty on Veteran.

Monday, November 11
Church Rescue (10pm, National Geographic, series premiere)
If you take Bar Rescue and you swap out churches for bars, you get Church Rescue. Following this line, if Jon Taffer applies his touted ‘bar science’ (which I still can’t get a degree in, thanks Obama) to fix flailing bars, would the people on Church Rescue be using church science? And I’m not talking about the Christian kind of science.

Tuesday, November 12
Black Mirror (9pm, DirecTV, series premiere)
The much hyped and lauded anthology series from Charlie Booker (creator of the 2008 zombie/reality show satire miniseries Dead Set) makes its way onto DirecTV’s Audience Network. Which is great news, assuming you haven’t already downloaded series one and two of the show (which is like Twilight Zone by way of Twitter) and use DirecTV as your teevee provider.

In case you’re wondering, what does Black Mirror mean? If you’re reading this, you’re looking at it. The black mirror in question are the screens to all our technologies. Booker wanted Black Mirror to explore our relationship with technology.

Thursday, November 14
Parks & Recreation(8:30pm, NBC)
The best thing NBC has got going comedy-wise returns after an unexpected and forced hiatus by NBC to make room for The Voice’s battle rounds. Savor each episode of Parks & Recreation, because as far as I’m concerned, we’ll be talking about Parks & Recreation in the past tense this time next year.

Ground Floor (10pm, TBS, series premiere)
From Bill Lawrence, creator of Scrubs and Cougar Town (and co-creator on Clone High, as I learned last year, much to my delight) and starring Pitch Perfect’s Skylar Astin. Astin plays a high powered banker who falls for the manager of the ground floor support team (Briga Heelan). Though the press materials refer to it as a kind of Romeo and Juliet, I see more of a comedic, American riff on something like Upstairs, Downstairs. Also, John C. McGinley co-stars!

Friday, November 15
Raising Hope (9pm, FOX, season premiere)
Greg Garcia’s underrated follow-up to My Name is Earl returns for a fourth season in the Friday Night Death Slot with two episodes back-to-back. Which is better than an outright cancelation, for sure. It’s just a shame, as the show consistently has shining comedic performances across the board.

Related, after Undisputed Truth, Oakland’s own, undefeated Andre Ward will be defending his WBA Super Middleweight championship against Edwin Rodriguez.

Sunday, November 17
Almost Human (8pm, FOX, series premiere)
Night one in a two night premiere! From J.J. Abrams and the Executive Producers of Fringe comes a cop show in the future. Starring Sexy Star Trek and Dredd reboot star Karl Urban, along with Michael Ealy (2 Fast 2 Furious, For Colored Girls) as a PTSD-afflicted cop partnered with an emotions-afflicted android in future LA.

Night two happens on Monday the 18th at 8pm, which will also be its normal time slot, moving Bones to Friday nights.

Eastbound & Down (10pm, HBO, series finale)
Despite my reservationsregarding a fourth season of Eastbound & Down, this season (which show creators maintain was the story they originally wanted to tell after season two) is probably the best of the three previous outings (and I was/am a huge season two booster). There was certainly resonance having the season premiere of Eastbound occur on the same night as Breaking Bad’s series finale, as both shows offer a complimentary look at the male mid life crisis. It feels like an insult to just call Eastbound a comedy. It’s a character study with water jetpacks.