A Real Sense Of Magic: Peter And The Starcatcher 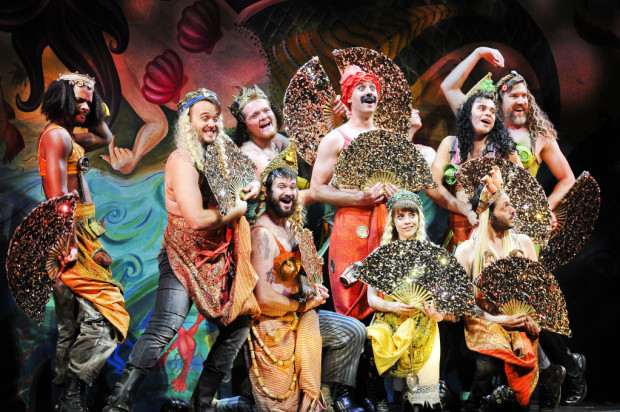 Peter and the Starcatcher is an odd bit of theater. Not exactly a musical, although it has a few musical numbers. Not exactly a child’s play, although it is a prequel to the classic tale of Peter Pan. It fits in an odd space between “serious” theater and light comedy.

Set on a minimal stage, with the large cast of twelve serving as characters, props, special effects, and narrators, the first act takes place on two ships. The exposition for this first act is a little murky, and it took me a good 15 minutes before I could get what was going on, but the gist is: on one ship there is the precocious young Molly, (Megan Stern), her nanny, (Benjamin Schrader–aside from Stern, the cast is all male), and three orphans who are being kept on board as slaves. On another ship is Molly’s father, Lord Astor, (Nathan Hosner), and the soon-to-be-revealed villain. And both ships are filled with your requisite crew of salty seamen or nasty pirates.

I am not quite sure why Molly and her father are on two separate ships, but it has something to do with a precious cargo trunk the father is trying to keep out of evil hands. Molly is well aware that this trunk contains “starstuff,” a magical MacGuffin that manages to do basically any kind of magic that is required by the play at any given moment, and vows to keep it safe.

One of the three orphaned boys is simply known as Boy (Joey deBettencourt), and Molly takes a fancy to him. Eventually he gets a name–guess what it is–and joins Molly on her quest to save the starstuff.

While Peter may be the hero of that later, better-known story, the stand-out characters here are Molly–a plucky, smart young heroine–and the villain, known, at least for the majority of the play, as Black Stache. He’s the comedic center of the show, and as played by John Sanders, he’s like a dandy Groucho Marx, often breaking the fourth wall, (and in one of the show’s comedic highlights, freaking out behind it), spouting malapropisms, and tossing out anachronistic, pop culture-filled punch lines.

It’s there that the comedy can often fall flat, delving very closely into Robin Williams in Aladdin territory. Some of these jokes are so stale–a Kelis “Milkshake” reference? Really?–I just hope that if the show continues to run for years to come, they refresh those references a bit.

One thing I hope they never change is the second act’s opening number, featuring the cast as singing mermaids, dressed in ingenious costumes featuring fans-as-fins, and other kinds of junk one might find at home (or floating in the sea), including a crown of baby doll legs and bras made out of juicers and tea cups.

While I’ll always be a bigger fan of movies than I am of live theater, I do appreciate when theater does things that just can’t be done in a movie. Casting adults as kids, for example, is something that you can get away with in the distance of theater, but in a film would likely come across as creepy and off-putting, requiring the casting of real children who probably wouldn’t have the chops to handle the comedy.

And having the cast create waves out of shaking ropes, a giant crocodile out of a string of white flags and red lanterns, and creaking doors with their bodies is something that could only be done in theater. It’s things like this that give live theater a real sense of magic–a throwback to childhood play and storytelling that fits perfectly in Peter and the Starcatcher.