There Won’t Be Blood: Carrie: The Musical 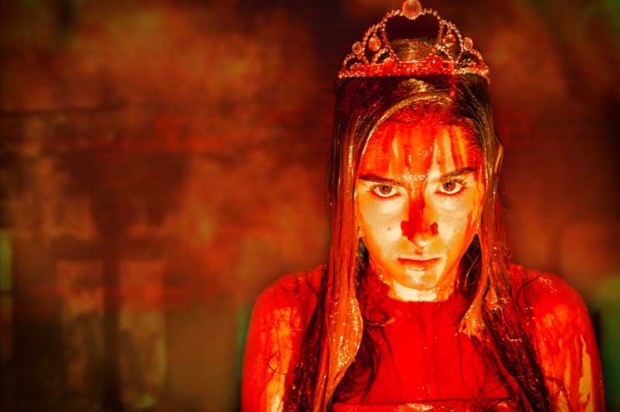 I’ve been obsessed with the Carrie musical since its brief and disastrous Broadway run way back in 1988. There was no Internet then, so I’m not sure just how I heard about it, but I knew it closed after a few performances, was supposed to be completely laughable and met with boos–and that I wished more than anything that I could have seen it.

For years it lived in the land of legends, at least until the creation of YouTube, when, at last, we could all be witness to some of its ridiculousness. (The Awl has an amazing rundown of the musical complete with clips here.) Turns out, it really was as bad as everyone said it was, with costumes that included shiny unitards, an opening number featuring aerobics, and a climax filled with lasers instead of fire.

After it closed, the musical’s original creators (Lawrence D. Cohen, Dean Pitchford, and Michael Gore) didn’t allow licensing, so no one was able to stage a legitimate version of it.

But years passed, and in 2012, those original creators decided to take another look at Carrie. They cut some songs, added some new ones, changed the staging, and gave the musical another shot, off Broadway.

While this one wasn’t the disaster the original was, it didn’t exactly take the theater world by storm. It closed after 80 performances, never making it to Broadway. But it was successful enough that the writers decided to open up licensing, and it’s this version of Carrie that Ray of Light Theater is currently running at the Victoria Theater.

This isn’t a campy retelling of the Stephen King classic. Instead, it’s played straight, with all the earnestness you might expect from musical theater. Set in a modern day high school (the set consists of a minimal wood frame that looks like the inside of a barn, with location changes done via projections, turning the set into classrooms, the gym, and Carrie’s gothic home), the basic plot remains the same as the book and film: Carrie is the class outcast and is bullied by mean girls, which we see as the show opens and she gets her period in gym class, but has no idea what it is.

But this opening bit sets up what becomes the musical’s central problem: dramatic moments are rushed through –Carrie is pelted by maybe four Tampax tampons before the scene moves on — to make way for way too many songs sung by her classmates.

The highlight of the musical is the duet “Eve Was Weak,” sung by Carrie and her ultra-religious mother, Margaret White. Heather Orth plays Margaret, and she has a larger than life presence, and a powerful voice. Cristina Ann Oeschger plays Carrie, and for someone who is herself still a junior in high school, she has a great voice. She is a convincingly mousy Carrie since she’s tiny, and the rest of the cast seems to tower over her.

The scenes between them are the musical’s strongest, but they are woefully limited. Additionally, the character of Margaret is made to be a little more sympathetic than she should be, since she’s the person truly responsible for making Carrie’s life a living hell.

There’s a large ensemble cast, and they do several numbers, most of them pretty forgettable, because really, they’re nothing but set-up for the main event: the worst prom night ever.

Unfortunately, the ending lacks any real suspense, and everything happens way too fast. Sure, the 1976 movie is a tough act to follow. The moments leading up to that fateful blood dumping are probably the most insanely prolonged moments of suspense ever seen in a horror movie. And while you can’t do slow-motion in a staged musical, you can at least not rush through the climax, and make it clear that the people responsible for the mayhem are actually in the same room.

And if the climax involves blood, and the posters for the show feature Carrie covered in blood, you would probably expect…blood! Alas, while something is dumped on Carrie’s head, there’s no way to tell what it is, because it certainly isn’t red.

The original musical became a legend, and were that version to be performed today, I believe it would be a campy hit. I understand the desire to treat the story of Carrie with respect, but it’s still a story that ends in fire and blood. At least give us that.

Carrie: The Musical runs until November 2 at the Victoria Theatre.